It’s time for another Kpopalypse Interview!

The subject of this edition of Kpopalypse Interview is Naino from Nutaz.  Read on to find out more!

Kpopalypse interviews emerge with the unlikeliest of subjects, and one of those subjects is Nutaz – a two-piece underground rap group who were on MBK Entertainment, and no that’s not a typo.  They were featured on a previous Kpopalypse Nugu Alert (the prestigious “these songs don’t suck” edition) and the group consists of members Naino and Venimun.  A member of the elite Caonima Interview Squad put me in touch with Naino and we had a Skype conversation about what Nutaz have been up to, their time with MBK and their new directions.

This was a difficult interview to conduct, because Naino has very, very broken English and took a long time to answer questions, even with an interpreter – kudos to him for being a sport and showing high determination levels to struggle with the language barrier.  Hence this interview is very short!  The following answers have in some instances been edited for clarity, but I’ve made them as true to his actual statements as I can possibly manage while also maintaining readability.

Hi!  How are you?  Answer in as much or as little detail as applicable.

A lot of international fans don’t know about Nutaz so this interview will be the first time many hear about Nutaz.  How would you describe Nutaz to them?

Nutaz is a pair, a hip-hop team.  We have been friends since middle school.  Just friends who play and create a team in a natural way.

Until a few months ago, we were in MBK Entertainment, but now we’re out cuz we’re not a match musically. 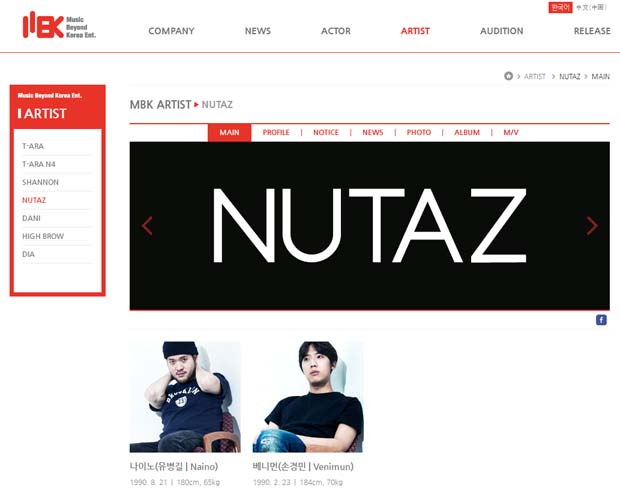 MBK’s website as of 17th March 2016, with Nutaz still listed (for now) as a current artist.

So Nutaz is still active?

Yes, still a duo team.  Just not with an agency, just independent.

We are projected to release an album independently.  It is maybe 60% completed.  I’m not sure of my plan, whether to get sponsorship from an entertainment agency or stay independent, but this album is really awesome, I swear.

Also I manage a crew called “Crimp” this is a crew that do art, music, anything and sell our work.

Has Nutaz been successful so far?

I think we are not yet successful, our team is ready to start.

How high is your profile in Korea?

I don’t know “what is success’s standard.”  But I will have success just by my own standard.

Nutaz has an “old-school” hip-hop sound.  What is your favourite era of hip-hop?

None, I just know if I’m hearing good music.  It’s the same with making my album.  I can’t talk about “this is ~era music”, it’s just music.  As it were, I like Odd Future.

How did you get involved with MBK?

I sent Nutaz’s demo tape to some major entertainment agencies.  The next day 3 companies contact us, and MBK is the one we went with.

What is your impression of MBK as a company?

Were they good to work with?

Many people in hip-hop in Korea also work with idols.  Did MBK ever try to get Nutaz to collaborate with idols?

MBK did try featuring Nutaz for a Davichi song.  We think our vibe is not a good match to Davichi.  And that’s so stressful, when a project is not completed.

What is your opinion of rap TV shows such as Show Me The Money, Unpretty Rapstar etc?

That was just a TV show, soso.  Show Me The Money has nothing to do with my music.

Do you think it is a good or a bad thing?

I think it’s just a show, and people like that.  I don’t think badly of it.

Tell me more about your crew “crimp”, what activities do they do?  I was told you are doing something in fashion now, is “crimp” part of this?

They do shows, clothes, music, pictures, anything,

Crimp site’s item is [I didn’t really understand the rest of this comment but I believe he was referencing his website].

Do you have a link to the site?

This looks good!  Can you tell me about this music item?

This is producer Lee Jong Min’s free instrumental.  You can download, stream, use is free for all.

When can we expect your album to be released?

Maybe 28th December 2015 his first Ep is released.  My album is maybe next year.

I planned a few more questions but after this short interview both myself and my contact lost touch with Naino, as he presumably is now working hard on Crimp and the next projects for Nutaz.  I also wasn’t able to secure a “proof picture” because of this, but it’s possible one may turn up in the future in which case I’ll add it here.

After this interview was made in December 2015, all of Nutaz’ old videos were taken off the Internet.  The videos of the old Nutaz songs above are reuploads by another dedicated caonima.  Those of you who speak Korean may enjoy this short video from Crimp’s YouTube channel which might shed more light on this interview (or might not).

It’s tricky to find Nutaz content, however if you like the songs in the videos above remember that while you’re waiting for new Nutaz material you can buy the older 2013 Nutaz album on YesAsia, Kpopalypse recommends that you do this and that you support Nutaz in the future! 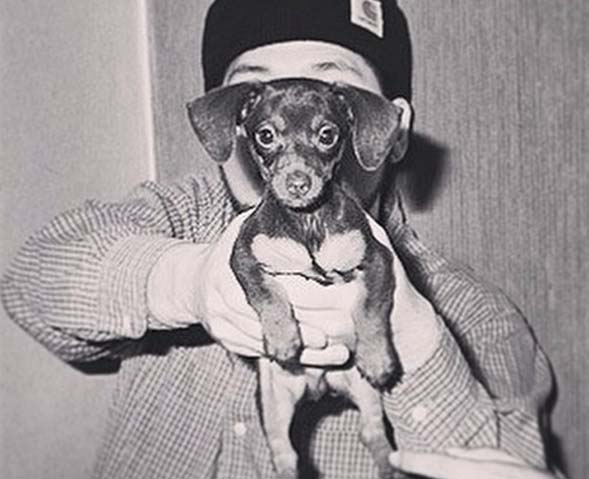 That’s it for another Kpopalypse interview!  Are you or do you know someone of interest in the Korean music scene who would like to do Kpopalypse Interview?  If so, get in touch!