Yes it’s that time again, another episode of the most unique k-pop video review series ever – Kpopalypse Nugu Alert! 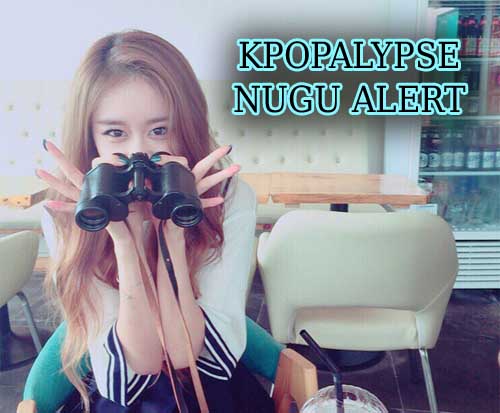 Read on to check out some more nugus!

If there’s one thing that Kpopalypse is against, it’s the pussification of music, and right now this issue has never been a bigger problem in Korean pop.  K-pop these days has fallen hard from the 2008-2011 glory days that drew in so many international fans from around the globe, the iconic upbeat dancefloor-stomping numbers that defined the genre like “Roly Poly“, “Sorry Sorry“, “Lucifer“, “Fire“, and many more having largely been replaced with languid wafer-thin trap beats, horrid self-serving egocentric R&B masturbation and sugar-sweet ballads that would be rejected by wait-on-hold music companies for being too wallpapery and dull.  Sorting the jewels from the trash in such a musical landscape becomes increasingly challenging each year, yet I do my best to hold aloft a shining beacon to guide those lost in the wilderness of sugary bullshit through the current dark ages and into what will hopefully one day be a new dawn of quality k-pop music.  Okay I don’t consider myself that important really, but admit it, that last sentence sounded cool, didn’t it?  Didn’t it?  Hey, where are you going?  No, don’t go there, it’s The Great Satan, noooo…

This episode of Kpopalypse Nugu Alert is dedicated to FUCKING ROCK MUSIC and we are going to see some HARD ROCKING ACTION from some Korean nugus in this episode.  Hopefully listening to something with a bit of a fucking nutsack in it instead of the usual soft crap k-pop fans are exposed to daily will help cure you of pussyR&Bitis and make you want to listen to some real music again, then when the next decent upbeat k-pop comeback comes along perhaps it’ll actually do alright.  I’ll also provide live clips of each group, just so you know that you are actually listening to real rock music and not some bullshit group that can’t even perform live without a pre-recorded backing track.  Usual nugu rules apply:

Let’s take a look at some heavy rock nugus!

Asian Chairshot might look and dress like Kurt Cobain’s long-lost Korean cousins, but their song displays the kind of structural unpredictability and technical proficiency that is more pre-popularity Soundgarden than Nirvana.  Before the explosion of Nirvana’s “Nevermind” album, Soundgarden were the Seattle group billed as “the group that will blow up big and explode the Seattle rock music scene worldwide” and their proto-70s style rock sound wasn’t considered grunge until many years later when the music industry started looking for ways to categorise them, before this time Soundgarden were routinely called a “Led Zeppelin clone group” in the press.  Asian Chairshot has taken a leaf or two out of the same sonic trickbook – starting off slowly with something akin to a “rock ending”, the song swiftly ratchets up the tempo with heavy distortion and a riff not dissimilar to Led Zeppelin’s “The Immigrant Song“.  Then the gears change again, with the band hitting the skids at 1:20 into a Sabbath-style stoner groove with virtuostic guitar soloing built from equal parts Tony Iommi and Eddie Van Halen.  In a normal pop song, the faster section would come back, but here it never does, with the slow groove playing out right until the end of this ultra-short yet still defiantly progressive rock edit, because too much fast-tempo rock in one hit might just give pussy Korean music listeners browsing on CJE&M’s channel a fucking cardiac arrest.  However for those fine upstanding men and women able to handle it (such as the good readers of Kpopalypse blog) the full song does have a return to the fast section, plus a long intro, so here’s a full-length live version for you to enjoy:

I can tell that this isn’t these guys’ first rodeo as those drum skins have lots of stick marks, they’ve clearly been on a few tours.  Still, please support them because this live shit doesn’t even have as much web traffic as most of the Kpopalypse cat videos.  Don’t worry, my cat’s not insecure about having less hits, she can handle it.

You can tell just from the band and song name that this is going to be some kind of bland emo-metal, and it certainly is, but that doesn’t mean it’s still not rocking harder than 99.9% of what comes out of Korea these days.  It also has a cheaper looking drumkit than 99.9% of all hard rock music videos everywhere, so hats off to these nugus who are clearly poor as shit and probably saving up for another MV as I type, even though this was released over 18 months ago.  Check the build quality on this: 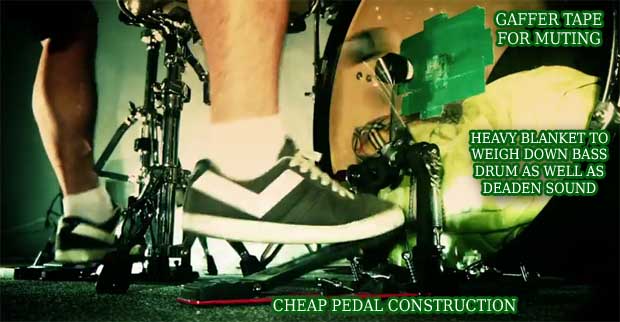 The twin bass-drum kick pedal that compacts two drum beaters into the striking area of only one bass drum has become the go-to budget solution for drummers who want to sound like the fast bit at the end of Metallica’s “One” but are too poor to carry two bass drums around.  The best thing about twin pedals is they will work nicely with literally any shithouse drum kit as long as you’ve also got gaffer tape to stop your cheap ass bass drum skin from flapping like a bedsheet on a clothesline and a heavy blanket to weigh the kit down and stop it moving forward from all the pedal pressure during those double-kick fills.  I can tell from the position of the clamps under the drummer’s feet that this particular pedal is exactly the same cheap garbage that all my friends use.  The frugal theme is repeated with the cymbal hardware, which the flashy back-lighting the video director spent 50% of their money on only serves to highlight: 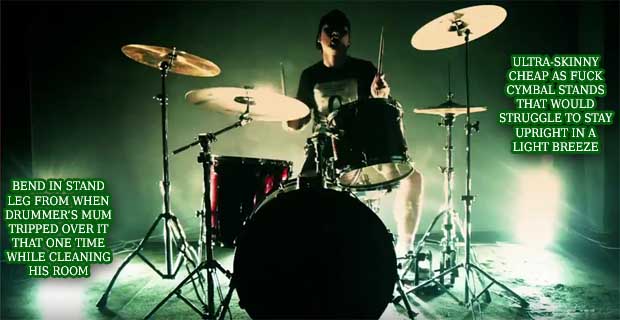 Never mind the cheapness though, this song contains an important positive development in Korea’s rock aesthetics – the female bass player who just happens to be in a group of guys and isn’t sexualised any more (or less) than the guys are, doesn’t get any more (or less) camera time and just rocks out the same as everyone else because this is the 21st century you fucking backwards-ass sexist fucking fuckhole, so what do you expect.  The west has had this super-equal treatment of women in metal ever since Bolt Thrower, so it’s good to see Korea getting in on the all-important “girls being in heavy bands is actually not a fucking big deal so get over yourself” game.  And here’s a live video where the cameraperson doesn’t even try to get a good angle on the girl bass player because it’s totally not a big deal that a girl is in a band.

Even pointing this out at all makes me feel like a cunt, but that’s only because I’m so forward-thinking and enlightened ahem.  Anyway maybe you should click on this band some more before they really do kill themselves from lack of love from you guys.

Here’s a group that sounds like a cross between Judas Priest, Dragonforce and King Diamond, which certainly isn’t a listening combination that I’d expect to be common among Korean pop fans, which of course is why I have to mention it.  The group’s performance outfits are even a slightly more suave version of Judas Priest’s obviously closet gay metal-warrior S&M-show garb, so you know there’s lots of value to be had here from watching the band footage, however the real drawcard here is the fantastic drama video.  In a post-apocalyptic future world where cities are collapsing and everybody commutes on foot yet sporting goods and Jack Daniels are still readily available, an angry young man beats other men over the head with a baseball bat for no apparent reason and then he cries a bit and smashes things.  However he didn’t cry as hard as I did when I went to this band’s channel and discovered their recent live video:

Holy shit there’s only about seven fucking people in the audience here, we need to give them a few more hits, people.  It brought me back to some of the bands I was in back in the day and the crappy gigs we played to audiences who didn’t give a shit, but even my own ultra nugu punk and metal groups didn’t do it as tough as Crux, because it must be some serious hard yards being a power-metal band in a country dominated by pussy weak R&B music.  To make matters worse, their new keyboard player even has a Kurzweil keyboard – those things are fucking dogshit, my brother had one of those and he recently got rid of it because it kept having stupid mechanical problems that a professional keyboard worth thousands of dollars should never have.  He actually took it in to get repaired and they told him something along the lines of “the problem is you’re playing it too much and it’s not designed for that level of use” which is a really nice way of saying “this is a fucking toy not a piece of pro equipment”.  Poor Crux girl, I bet she’s already had that useless thing in the repair shop at least once since this video was taken.  If this review stops just one keyboard player from buying a Kurzweil, it was all worthwhile.

That’s all for another episode of Kpopalypse Nugu Alert!  As surely as the sun rises in the east, Kpopalypse will return with more nugus!