Three things I have noticed about my readership:

So here’s a little post about pedal-point harmony – a musical term that I refer to quite often.  What the fuck is it?  Kpopalypse will explain all!  Although this is a music theory post, you won’t need to know anything about music to understand this post, because I’m going to attempt to explain pedal-point harmony in a way that any drooling fangirl can understand.  Or maybe not, but we’ll certainly talk a lot about drooling fangirls on the way, just for fun.  Don’t forget your napkin!

All sound is vibration of molecules.  When a sound is generated from a singer or instrument, the vibration of the singer’s vocal cords or instrument vibrates nearby air molecules which also start going from side to side.  These molecules bump onto other air molecules until they eventually get to your ear, where they bump into the hairs in your ear that then also start going from side to side.  Because your brain is super-Boram-genius, it then converts those hair movements into brainwaves and that’s how you get to hear “NOW BLOW IT LIKE A FLUTE, WOO OOOH, WOO OOOH OOOH”, aren’t you lucky.

Yes I just copy-pasted the above paragraph from my post explaining why MR Removed videos all suck and changed it a little because I’m lazy, but here’s where it gets different.  When we hear a note that is high and then one that is low, the difference between the two notes is actually a difference in vibration levels.  Sounds that sound higher actually vibrate faster than notes which sound lower, and this quality of vibration speed is called “pitch”.  In textbook music theory pitch is measured by letters and positions on a musical stave, as per below: 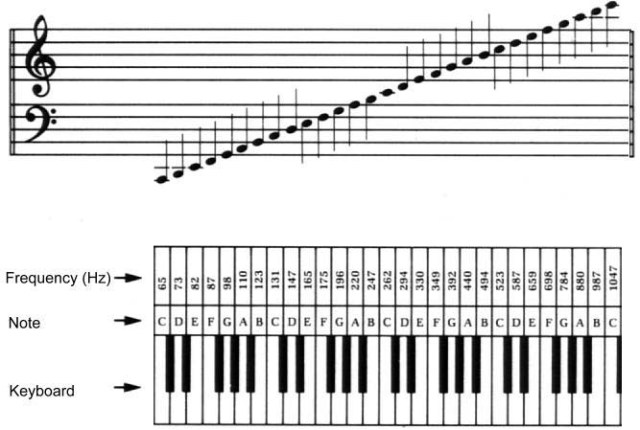 However we’re not going to worry about that letters-and-positions crap for now because I don’t need to get into music notation in order to explain how pedal point harmony works (although I might do more textbook music theory posts in the future if people show enough interest), for now we’re just going to focus on the vibration frequency, which is measured in Hz (Hertz – vibrations per second).

While the frequencies of vibration are important as they do determine pitch, they are not important in isolation, it’s the relative differences between vibrations that are important.  Let’s consider this fangirl: 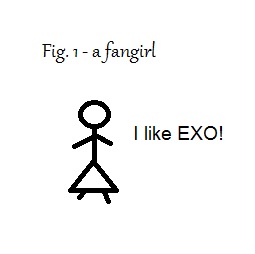 This EXO fangirl loves EXO’s Kai with all her heart, so therefore she considers all experience relative to Kai.  In the above picture, Kai is 6823km away from our fangirl and therefore not visible, so she is relatively calm.  However what happens if we bring Kai to within only a few metres distance? 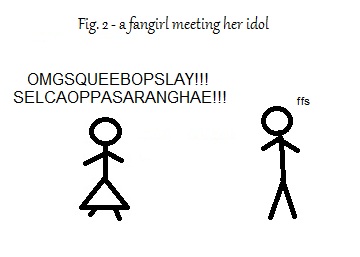 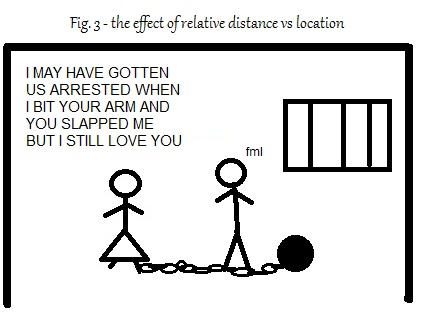 Likewise, if Kai was running away from the fangirl but the fangirl was also running to catch Kai at an equal speed, it could be said that there is no relative difference in distance between them both, and therefore no meaningful effect on the fangirl’s state of mind.

In music, similar principles exist – all sound is relative to a fixed Hz sound-point.  If someone plays a piece that starts with one note at a specific pitch, this pitch (usually) becomes the point which everything else is then determined and measured against.  This is a powerful and important concept in music theory called the “key” (not Key from SHINee – calm down) and the note that forms the basis of the key is called the “root note” (nothing to do with the Australian definition of “root”).  The way that any future notes in the piece are heard is relative to this “root note”.  Keys in western music can be “major” or “minor”, I won’t bother to explain this in detail here but this relates to the distance between the “key note” and the other notes around it, often (but not always) in the form of a “chord” or group of notes.  The important point being, the importance of these notes is still defined by their relationship in distance to the “root note”.  Just like with the fangirls chasing their oppa, distance is everything.

Harmony is a word for what happens when more than one note is played at the same time, and harmonies also have a “root” which is (usually) the lowest (least vibratey) note of the harmony.  Usually these harmonies are in the form of chords.  During songs harmonies tend to change over time, because a song with only one harmony in it can get boring.  The most common type of pop harmony is the “four chords” setup but many varieties exist.

Most harmonies in pop music move in parallel – when one notes moves the other notes move in the same direction at about the same distance.  Imagine a song with changing chords, where the lower note is Kai running away and the higher notes are the fangirls chasing him down the street waving their mobile phones and used maxipads.  There is movement, but because the movements are roughly equal, not much is really changing.  A good example of parallel harmony in a song’s backing track would be Juniel’s “Pretty Boy” where the harmony is based around shifting guitar chords.  (In fact there are many songs like this but I picked this one because Juniel probably could use the tiny amount of exposure that being in a Kpopalypse post entails more than most of them.)

A pedal point harmony happens when the movement isn’t parallel, however nor is it directly opposed as in the case of Kai running away while the fangirl gets slapped down by security.  Pedal point harmony has one harmony element that stays consistent while other music elements of the harmony change around it, like a k-pop idol running away while their fan lies on the ground in despair, their dreams of stealing oppa’s heart in tatters.  Although there’s less movement overall, the actual effect to the listener is of more movement because the distance between the static and moving parts keeps changing, and it’s that distance which is all-important for the brain’s perception of harmony.  This is what makes pedal-point harmony musically an interesting harmonic choice, at least to Kpopalypse.

The other part of why I like pedal-point harmony is because the type of pedal point harmony that is in a lot of k-pop isn’t the jazz type where different chords are played over static bass, but the type that frequently occurs in heavy metal – static riffs over changing lower harmonies.  As someone who grew up on a diet of heavy metal music, it’s nice to hear some influences of this style resonate in the pop sphere.  In the following classic Iron Maiden song the main riff is introduced over two different bassnotes from 0:12, and then a third bassnote is added to the same sequence at 1:21.  The repetitive riff actually sounds less repetitive because of the lower harmony that’s moving under it.

Of course, I wouldn’t expect every reader to give a shit about Iron Maiden, and it wouldn’t be a Kpopalypse post without k-pop examples, so here we go with some examples of pedal-point harmony as applied to k-pop:

Crayon Pop might be all about punk ideology but their ultra-rocking “FM” is kpop-gone-heavy-metal complete with distorted guitars, explosions, cartoon violence and of course pedal point harmony.  No wonder soft pussy Korean pop fans with their wimpy R&B-liking music taste hated it – it was way too musically extreme for those weak fucks.  The main high synth riff at 0:24 completes a cycle over the top of a “four chords” harmony but the actual notes don’t change, however the relative distance between each note and the chord’s root changes with each playing of the riff, giving the listener the effect of four riffs rather than one.

One of the many little details buried in the mix of Rainbow’s brilliant and largely misunderstood “Black Swan” is that the main keyboard riff that drives the chorus from 1:03 plays again at near-subliminal volume over completely different chords at 1:12.  Even Rainbow fans probably didn’t even notice this subtle pedal-point harmony addition.

Almost any upbeat KARA song could be used as an example for this post, but “Pandora” will do.  The main riff starts at 0:21 and relates two and a half more times over gradually descending backings before ending with some kind of weird whammy thing just to drive home the point that KARA at their peak were the queens of metal.

It’s easy to get confused by all this though, so here’s some examples of what pedal-point harmony is not:

A song that might sound like pedal point harmony to some ears but actually is not, is D.Holic’s “Murphy & Sally”.  Note how when the chorus steps down in pitch at 1:30, the main synth riff follows with exactly the same type of step-down.  This is actually parallel harmony – both elements changing at the same rate, by the same amount.

f(x)’s Indian-classical-influenced “Rum Pum Pum Pum” doesn’t actually have any harmony changes at all, at least not in the sense of western music theory.  Both the bass and everything above it are essentially static.

Lim Kim’s hideous “Awoo” lives in a kind of ambiguous area which can’t really be classed as pedal-point harmony because the main fingernails-across-a-blackboard keyboard riff is the same length as the entirely of the four chords that it cycles over, so it’s all part of the same “loop”.  However the song does still have a very pedal-point sound to it nevertheless just due to the sheer ear-grating one-note repetition of the riff’s structure.

Speaking of slicing your ears up and putting them in a bin forever, the undisputed worst song of 2015 plus possibly the worst trap song in the history of the form “It G Ma” does actually feature bassline changes with static higher backings, but that’s probably sheer laziness on the part of the producers rather than by design, because trap music always has incredibly lazy production, the entire style only exists because Three 6 Mafia were too stoned in 1991 to figure out how to use the speed control on their drum machine.  Trufax.

Hopefully if you didn’t know about this shit, this post has helped you understand pedal point harmony a bit better, and if you already did know about this shit – good for you, you can talk to people on the Internet about how you already knew about stuff in a Kpopalypse post!  Either way, hopefully you managed to wring some small semblance of entertainment value out of it!  Kpopalypse will return with more posts soon! 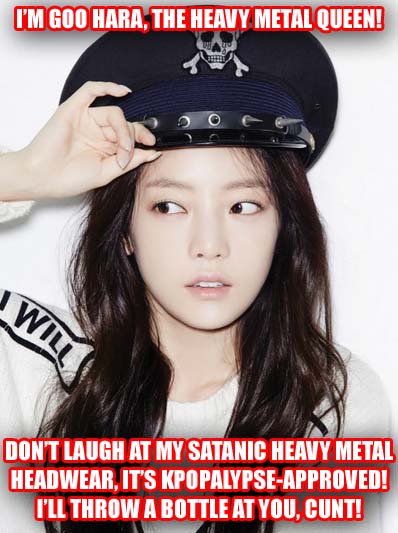