That’s right caonimas, it’s time for another episode of:

This will be the final Nugu Alert for 2015!  Let’s round up the year’s final bunch of nugus for your appreciation and entertainment!

This episode of Kpopalypse Nugu Alert is all about k-pop girl groups.  It’s pretty clear from the feedback I get about Nugu Alert that out of the tiny minority of you who give a flying fuck about these posts, most of you would rather see girl groups than anything else featured here.  Always one to cave into popular demand, Kpopalypse is here to fulfill your wishes!

The usual rules apply.  Here they are for those needing a recap: 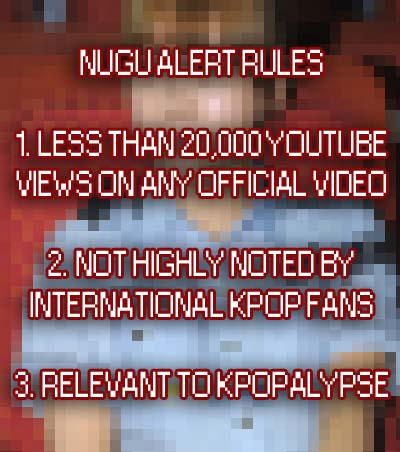 The first rule weeds out a lot of girl groups, because girl groups are popular.  Suggestions such as A.H.H.A, PPL (Perfect Performance Ladies), ACE, DiaGirls, ATT and Hotties were all earmarked for this post but then discarded when they quickly racked up over the 20,000 view limit (but I’ve included their links here so you can catch up if you missed any of their outstanding work).  However fear not as Kpopalypse still has nugus to share!  I like girl groups too, because on average they tend to have the better music (I’ll save why for another post), plus girl groups have girls and girls are a plus, so I do make a special effort to try and seek out new girl groups when I can.  Here’s some ones I’ve found recently, and I’m pretty sure that these are all suggestions from multiple readers.

A-Daily are nugu as fuck.  The first sign of a mega-nugu is when a group you’ve never heard of before comes to your attention with their second release.  Even when you’re already subscribed to every k-pop list, forum and blog known to man you still missed noticing their debut – so what was it?  Apparently it was a song called “If You Don’t Tell Me“, which seems to have fared so badly for the group that the agency abandoned their YouTube channel completely and started a fresh one.  Another sign of ultra-nugudom is that their recent Music Core performance has ZERO VIEWS 24 hours after it was uploaded, and that’s to popular official channel MBCkpop.  I didn’t even think it was possible to have no views on YouTube, even when I’ve uploaded my own videos to YouTube I’ve at least watched the fucking things once just to check that they were working.  The staff at MBC clearly don’t give any more of a fuck about this group than anyone else.

The song “Spotlight” isn’t too bad though, and the backings even have a bit of a Bravesound circa 2013 flavour in a semi-decent way, being similar to the sort of sound they were rocking for SPEED and Teen Top back then.  I doubt it actually is Bravesound producing this though, mainly because I’m not hearing “A-Daily, we’re back, with Bravesound!” in the spoken intro which seems to be mandatory for them these days, but it’s a reasonable enough copy for a low-budget agency.  I’m not sure what the brief appearances with the brooding male are about though, maybe he’s jealous because the A-Daily girls are “in the spotlight” whereas he’s just another Korean actor relegated to appearing in shitty MVs nobody watches except my blog readers.

Ultra-nugu group The Starz have just come up on the k-pop scene and damn they look great as they bounce around in various flattering clothings to a song that is actually reasonably above average and certainly comparable to the better recent stuff from Gfriend, Apink, etc.  Various cheap-ass outdoor locations are used including that same amusement park that all the nugus flock to because they get super cut-price rates on dancing next to weirdly-painted rollercoasters and shit.  Also featured are other idyllic locations such as a beach, a road that the girls calmly stroll through the middle of (watch out for Ladies Code’s manager, girls) and a building interior that looks just like the one from the “Assault” map in Counter-Strike, complete with rusty metal beams and non-OH&S-compliant junk everywhere.  I mean, look at this:

That’s not computer game texture-mapping, that’s an actual fucking floor with bits of wood, nails and other crap all over it and they’ve got the girls dancing in high heels over this shit!  Now that T-ara and After School don’t get limb-snapping comeback dance routines anymore The Starz are making a strong bid for the coveted title of k-pop’s girl stunt group.  Pity the video editors fucked up their lipsync, their lips really aren’t in time with the words at all, but I guess that’s only a minor concern when you’re worried about a dilapidated building caving in on you at any moment.

Notable attribute: strong wind capable of blowing the girls’ hair around forcefully but not capable of turning a wind farm turbine

Pride Band – My Heart Is Broken

Let’s change it up with a rock band instead of an idol group.  While The Starz are occupying the interior of the “Assault” map, Prideband decided to to film the outdoor scenes for their MV on the street outside that you always end up fighting in when there’s a really “fuck waiting for them, let’s rush the alley” team on the terrorist side.  They even dress the part for those scenes:

Now that’s an alleyway I would rush.  Pity the song in this case is some super-conservative, ultra-maudlin rock music of a very pedestrian nature that doesn’t fit the theme at all.  However, there’s a bright side – the slower song allows lots of long, lingering camera shots of the girls, who all look great, especially the blonde resting-bitchface bass player and the far-eyes-queen look-ma-no-double-eyelids second guitarist.  They look even better again in the black clothes in the indoor white-room scenes which I won’t screencap here but you can watch the vid and… ah fuck it, yes I will screencap it.  Who knows, maybe one day their channel will go down and I’ll be robbed of fap material if I don’t preserve these images now:

Hot as fuck and you know it.  Of course holding a nice guitar automatically increases any female’s sexiness by 2.73%. 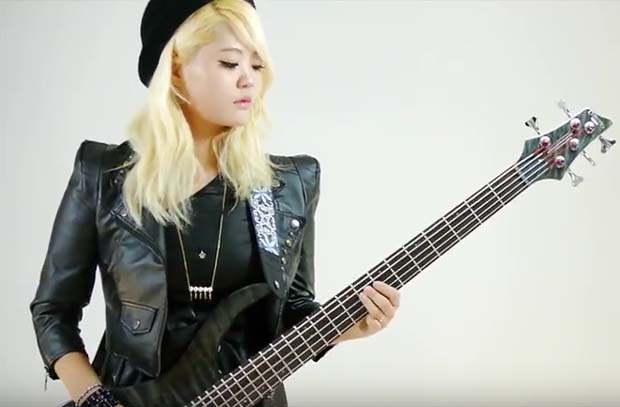 I went out with a girl once who had this kind of resting bitchface going on.  She also played the bass a little so this reminds me of her, and being reminded of hot girls who I used to date is always a fap-enabler, but she’s hot anyway.  I know I’m focusing a lot on the girls’ appearances here but the song is really shit so I’m trying to redirect attention on the positive things I enjoyed because I’m that kind of nice, positive person who is always looking for something good to say.  Anyway, I really appreciated the slow, steady camera work which arguably looked a bit amateurish but really allowed me to investigate these girls’ talents fully.  Hopefully Pride Band are still around and do some more MVs one day.  Let’s leave with a bonus video of them doing Ailee’s “U&I” and actually making it sound slightly less shit.

If you’ve read this far, you’re a hardcore Kpopalypse Nugu Alert supporter, so thanks for being one of the few lucky individuals who has supported the series in 2015!  Kpopalypse will return in 2016 with more nugus for your entertainment!