Hello and welcome to another edition of the officially most unpopular and nugu Kpopalypse series ever, Kpopalypse Nugu Alert! 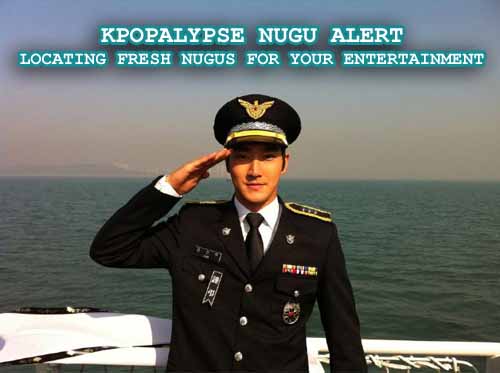 It’s time to scout out and reel in another fresh crop of nugus!  Read on and let’s get the nugu fun started!

Idols getting into acting is a topic that divides opinions among k-pop fans as well as fans of Korean TV series, dramas and movies.  Several people just love seeing their bias on the TV screen cutting their teeth in a dramatic role, while others feel that idols generally don’t do a good enough job for them to be worthy of taking the place of regular actors and worry about job losses and financial hardship among the regular acting crowd.  Of course the economic reality is that even if their acting is sub-par, the idol’s star power will usually provide a bit of extra interest in the audiovisual content for their legions of crazy fans to get excited about so their inclusion ultimately means more employment for everyone as a lot of shows probably wouldn’t even be very economically viable at all without their star power.  Like their inclusion or loathe it, the reality is that idol actors provide an important economic function and aren’t going anywhere anytime soon.

However, what about when the shoe is on the other foot, and actors who are not musicians find their way into drama music videos?  This is a side of acting which pays the bills for many Korean actors and actresses, plus another way in which the Korean music industry helps feather the nest of starving thespians.  However you don’t often hear so much about actors getting MV work and it attracts far less controversy, probably because it’s less easy for cynical media and rabid anti-fans to twist this kind of activity into the usual trendy “look at these idol bitches ruining everything again” narrative inside their own heads.  The popularity of music videos with drama content means that the relationship between idols and actors is not adversarial at all and in fact quite symbiotic, and as a result nowhere does the actor/idol debate seem more stupid than within the entertainment industry itself.

The following Korean music videos demonstrate this important and vital symbiosis by featuring outstanding acting skills, showing idols (okay, would-be idols) and actors working together, flexing their professional thespian abilities to breaking point, all in the name of entertaining you, the viewer.  Please now appreciate the following nugu videos so the efforts of these individuals are not wasted.

Let’s kick things off with an outstanding reader submission.  K-pop boy group Blast invite you with their catchy slogan to “Be The Blast”, and remain true to their moniker by spending most of the required singing and dancing quota of “Git It Girl” in what looks like the inside of a nuclear reactor undergoing some routine maintenance.  They’ve also got the moves, with lots of only-slightly-awkward shuffling, a hot jacket-slide-off routine at 2:19 and an outstanding finishing-the-song move of a calibre rarely seen in k-pop nugudom.  The real star of the show here however is of course the acting, as the boys of Blast sleaze, creep and sexually harrass their way through various interactions with a lady who has seemingly had a gutful of their shit and is holding out for a more popular k-idol to throw in her chips with.  You can almost hear them say “I want you to be my blast, baby” or some other horrid pick-up line as the girl rolls her eyes and laughs at their mop-tops.  The various eyebrow-raising and bitchface expressions all throughout the video are pure gold, and the creepy dudes getting consistently rejected and never getting what they want is an unusual plot-twist for k-pop MVs where constant advances from pushy douchebag guys usually ends in a generous dose of classy-sexiness – but Blast are modern reconstructed 21st century men who get it into their thick skulls that no means no – eventually.

At the start of this video an old woman (who actually looks like Tina herself with a grey wig) see a young couple and reminisces back 40 years ago to a time when she and her partner were young and hot and all the technology was exactly the same.  Her first fond memory of yesteryear is of them spending lots of time having an absolute laugh-riot at an airport terminal, because airports were such hilarious places back then.  Further exciting locations include a three-star hotel with a crappy water-feature in the courtyard, a generic shopping mall and boating on an only slightly polluted river, with our couple smiling a lot and generally being really thrilled to be out and about.  I guess their day jobs when not on holiday consisted of gold-farming shitty computer games in rotating 12-hour shifts if all it took to generate such an exuberant reaction was staring longingly at some wavy bits of water.  Eventually Tina wraps up her holiday reminiscing thinking about that time they all got rip-roaring drunk and danced and sung a much better song than “Happy Day” with a bunch of losers in front of some hut somewhere.  The acting performances are outstanding and by the end of this video you’ll be thoroughly convinced that Tina and her partner are just as insane and easily amused as the video is portraying them to be.

Notable attribute: at least 80% of budget probably spent on CGI heart at 3:30

Many years ago, I was chatting with a (sadly now deceased) friend who was a Visual Kei DJ and who had quite a strong obsession with Japanese culture generally.  She told me about how she collects “lolita magazines”, and after some confusion on my part she clarified that these magazines were not what I was thinking but were in fact completely legal and dedicated to “lolita fashion“.   She then gave me a couple of these magazines to flip through, and I spent the next ten minutes looking at hundreds of pages of lolita fashion models, all wearing slight variations of seemingly the same Rococo-inspired outfit.  One particular lolita fashion model caught my eye due to her stunning appearance and uncanny smile in every single photo.

Me:  Who is this girl?  She’s kinda cute but also kinda weird looking.

Her:  Oh, that’s [can’t remember her name], she’s a well-known celebrity and one of Japan’s top lolita models.

Me:  Her smile is strange, there’s something about it.

Her:  Yeah, you’re not imagining that.  In order to have such a perfect smile, some lolita models get surgery on the sides of their mouth where a slight upward cut is made, so after it heals it looks like the model is smiling all the time.

I don’t remember who the girl in the lolita magazine is these days and I definitely couldn’t recognise her from a photo, but if you’re curious to know what that uncanny surgically-altered smile looked like, you can see the actress in Blissday’s “My Pride” video make almost exactly the same smile that I remember at 0:03, 0:08, 0:11, 0:15, 0:23, 0:32, 0:35, and so on.  Trust me, you’ll get to know it well by the time this song is over.  It’s a completely captivating and terrifying performance from the actress, with her glazed-over stares directly to camera completely convincing.  The whole experiences comes off like a Blair Witch Project/Cloverfield style POV horror film of balladeering hell where you’re trapped in an endless cyclical relationship where you court this creepy girl over and over again and your mouth is taped shut so you can’t just scream out “let’s just be friends”.  All the film is missing is for the camera to pan down at the end of the video to show the iron chains around your ankles that shackle you and her together… but then, you do end up marrying her at the end of the video which is kind of the same thing.  I couldn’t even write a horror fanfiction this disturbing.

Notable attribute: how good an actress is she to get so convincingly fucking fascinated by a few green leaves at 2:46 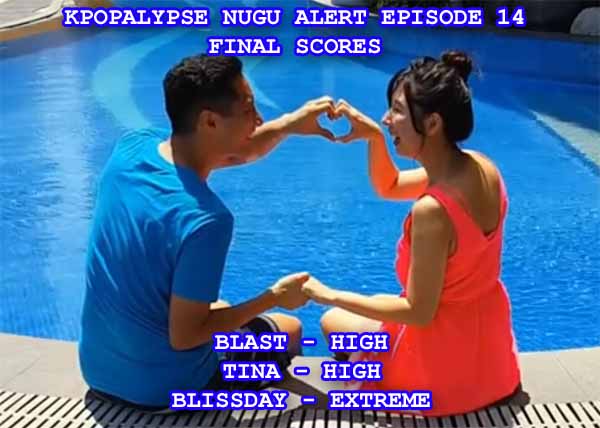 Thanks for reading!  Kpopalypse Nugu Alert will return again at a future date with more nugus!