Welcome to another edition of:

straight out the fuckin’ dungeons of rap,

where fake nugus don’t make it back!

Kpopalypse is back on the nugu tip
time to get packed for another trip, bitches
call it a nugu mission – this new edition
is awkward cos it puts me in a kinda screwed position
this one is dedicated to the yoloswag Kpopalypse hated
but k-pop is fated to be eclipsed and saturated
with nugus hoping to demonstrate that they have sung a hit
rising with more determination than Hwayoung’s left tit
hoping to advance past the state of having made jack shit
let’s see how these nugus try to cope with it
less than twenty thousand YouTube hits is the nugu limit
videos higher than this don’t qualify to be in it
let’s see which nugus could one day make a cash pile
now come with me on a journey into the yoloswag style
(each review comes with suggested hip-hop beats
so you can practice your fly rap rhymesaying techniques)

Joe Rhee appears to be stuck with boring R&B
doesn’t even rap but still qualifies abundantly
for this yolo edition, but “Already” seems to be missing
something more to see, than just piss-poor choreography
the girls listening in the MV would certainly agree,
they don’t even seem to be that interested in being on TV

let alone with some weedy dude who thinks he’s G-D,
how is Joe going to cope in the k-pop industry
if there’s no hope for even those who are paid to be
in the MV to show some fuckin’ enthusiasm
the girls are all like “nope he couldn’t give me an orgasm”
and fuck this soft backing with the hopeless keyboard spasm
good beats these days are hard to find like a phantasm
there sure is a chasm between what Joe Rhee plays
and the kind of backing tracks that I’d like to hear these days
YOLO SWIG SWEG SWAG 420 ALL DAY SLUTS!

Notable attribute: girls employed purely for eye-candy but not paid enough to wear any revealing clothes

This rap guy called Skolor probably won’t make a dollar
perhaps he should go back to school and send a holler
out to his schoolteacher, maybe they can reach a deal on
how to spell his name correct before he makes another feature
It’s sad that Korea has caught this shit from Australia
MCs where I live always write their name like a failure
They sure make us Suffa the way they do things by half
In a room of good MCs here you can sure feel the Drapht
Anyway I digress, it seems that Skolor might bless
us with some good beats because it seems that he can write best
even though he’s not possessed with great skill at least Skolor is trying to be
different, breaking up the sound with some beat variety
might I be presumptuous to lump your brain cells with the uncomfortable
clump of thought that while this smells it’s still better than Tymee
but there’s no need to lie to me I want to figure it out, so
someone please tell me what that fuckin’ interlude’s about
KPOPALYPSE IS BACK – GO TAKE A SHOWER, CUNTS!

Notable attribute: hasn’t been forced to change his logo by SM yet

Blackjacks like to think that CL is the queen of rap, but
when it comes to MCing she’d better mind the fuckin’ GAPP
Forget Dr Pepper because GAPP is drinking Welch’s
and she’d better watch out because I reckon that he felches
plenty of Blackjack colon, that’s how he’s rollin’,
your asshole is his goal and I know cos I was told that the
song title means “Moronic Shit-Eating Bastard”
let’s check back on him in a year and then we’ll see how he’s lasted
against the Blackjacks, Redditors and k-pop fans on crack
that lack the exact knack of stacking up what is whack
against the back catalogue of classic k-pop tracks
the fact is that most of these kids don’t know what crap is
they probably think that GAPP is the best that hep-hap is
send them to Kpopalypse and they’ll soon learn what a slap is
then they’ll be looking around for where their shower cap is
REAL HEP HAP BITCH!  CAONIMAS IN THE HOUSE FUCKHEADS!!!! 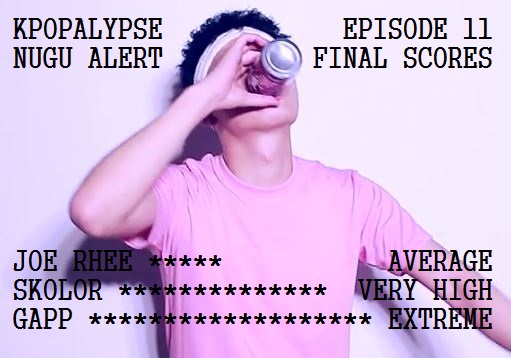 Suggested instrumental for this rhyme: Gang Starr – Above The Clouds (DJ Premier)

That’s the end of yet another Nugu Alert
hope you enjoyed, but if you were someone who got butthurt
before I flirt with some more nugus to stamp on
you might want to pull up your skirt and change your tampon
let’s not skirt around the issue, learning about nugus might
hurt your brain tissue, but nobody will miss you if you
listlessly miss the mystery of k-pop lists
learning twists in nugu history could lead to bliss
Kpopalypse expanding your brain like a cyst,
pissing in the punchbowl of your musical elitist
writing about nugus how I see fit, make sure you
tell your friends all about nugus and continue to check out this shit
the quality should be no secret, let’s now move on
with highlighting k-pop nugus and see how deep things get!