Inquiring minds wish to know the answer to the following question:

On the surface it’s understandable that f(x)’s Sulli and T-ara’s Hwayoung may seem similar.  Both girls have a reputation for being kind of lazy, not pulling their weight while on the job and jeopardising their respective groups’ careers at one point or another.  But how much of this perception is justified?  Let’s take a closer look at the behaviour of both of these idols, so that their determination levels can be properly assessed. 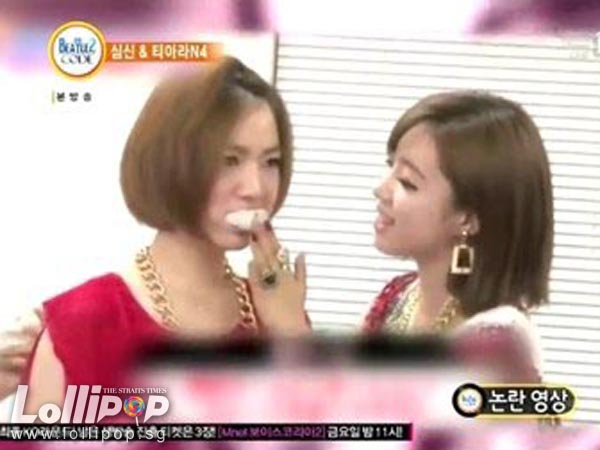 Everybody knows what Korean idol diets are like – dangerously unhealthy!  Most idol diets consist of food that is high in protein and vitamins but very low in carbohydrates, however carbohydrates are essential for correct brain, kidney and nervous system functioning and the side effects of not enough carbohydrates include constipation, fatigue and depression.   Noticing that Hwayoung wasn’t performing up to par on live stages and concerned about the possibility of fatigue brought on by a low carbohydrate diet, groupmate Eunjung helpfully and caringly used the guise of a Japanese game show to feed Hwayoung a precious rice cake, a prized high-carb item usually forbidden by their agency’s strict dieting regimen.  Hwayoung ungratefully grimaced through the ordeal, making rude unpleasant faces – giving away the truth: Hwayoung didn’t need any extra carbs, and was just underperforming due to chronic laziness.  Eunjung’s thoughtful gesture was a misjudgement that she surely regrets to this day as Eunjung has been criticised for this show of extreme caring and consideration ever since.

Sulli on the other hand knows all too well what it’s like to go without enough food.  Here she is (far right) performing at the World Federation of Neurosurgical Societies symposium in September 2013, however it seems that Sulli had some neurological issues of her own, struggling to keep up with her team’s hectic and demanding dance routines.   Many people criticised Sulli for seemingly being lazy, but the truth was different – those who were paying attention will know that only one month before this performance Sulli was placed on the notorious “Plastic Bag Diet” by SM Entertainment.   Plastic contains no nutrients whatsoever, and can even interfere with the nutritional value of other food, robbing Sulli of much-needed sustenance.  Nevertheless Sulli showed great determination to continue with the show in a reduced capacity and even managed to get through the entire event without collapsing.

In the above video you can clearly hear fucking Hwayoung in the background swearing her rude little ass off in Korean saying “fuck” (씨발 ssibal) and “that’s fucking hilarious” (존나으켜 jonna eukyeo), probably nastily bullying the shit out of somebody behind the scenes, as the lazy slut is known to do.  Who knows, maybe the underpaid staff members deserved it but swearing in the fucking background while Boram is trying to do a fucking interview is just being a cunt.  Eunjung, once again being the caring thoughtful member, notices all the fucking bitching and whispers Hwayoung’s name to try and get her to stop the tirade of abuse, but being a complete selfish cunthole who is lacking in determination to shut the fuck up when someone else is on camera, Hwayoung pays no attention and keeps mouthing off like a rude cunting whore.

Here’s Sulli saying “motherfucker” (肏你妈 cào nǐ mā) in Chinese on some TV show nobody watches.   Sulli doesn’t even speak Chinese, so firstly she’s showing great determination here to learn foreign languages, something Hwayoung never noticeably gave a fucking crap about.  Also the tone of Sulli’s voice makes it clear that she’s not actually directing the statement at anyone but is just learning the word, probably trying to differentiate it from the similarly pronounced “grass mud horse” (草泥马 cǎo ní mǎ) so she can promote freedom of expression in China, very thoughtful of her.  Most importantly of all though, she’s not saying it while Boram is trying to do a fucking interview, showing that Sulli is determined not to be a rude cuntfaced bitch. 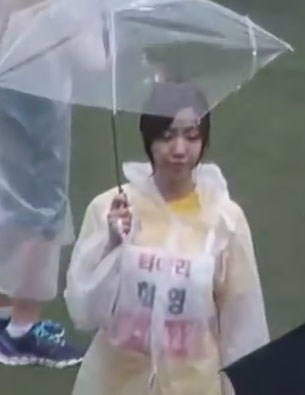 Here’s Hwayoung venturing dangerously onto a sporting field with a broken umbrella that has sharp edges and hanging bits.  We all know about the high injury rate of k-pop idols doing sport – these people are musicians, not athletes and they fuck up so often on the sporting field that when they don’t have injuries it’s actually considered newsworthy.  Hwayoung’s carelessness and lack of determination to exchange or fix her broken umbrella could lead other foolishly sporting idol persons to have a serious injury or even death! 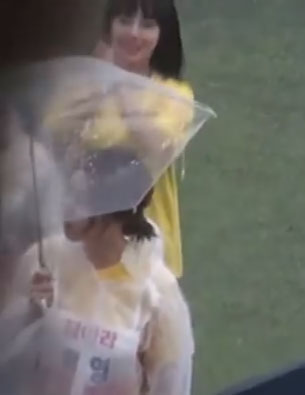 Luckily, here comes thoughtful Boram, to the rescue with a smile on her face and an umbrella that actually fucking works.   Pity that Boram is so short that she can barely lift her umbrella over Hwayoung’s head, but she does her best to shield her while Hwayoung stands around sullenly, being a cuntosaurus and acting like everyone else owes her shelter from the rain.  Since when does the shortest person hold an umbrella over the head of the tallest person?

Sulli has the right idea about umbrellas – get the taller person to hold it.  If Minho expected Sulli to hold her umbrella over his head, now that would just be rude, wouldn’t it.  Of course Minho wouldn’t expect that because he’s a nice man who cares about Sulli’s welfare and boobs. 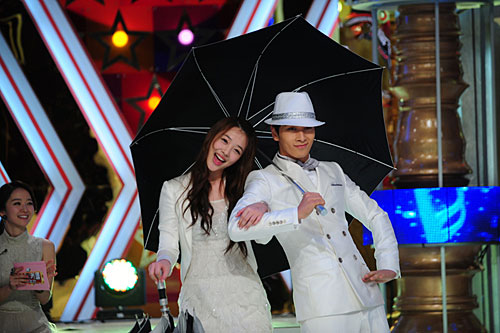 Here’s Hwayoung in a T-ara interview and it’s the typical bullshit type of interview that all k-pop groups have to do.  The standard modus operandi of this fucking interview wank k-pop groups do is that everyone must smile all the time, laugh at each other’s lame jokes and pretend that they’re the bestest friends in the whole wide world, or pathetic spoiled entitiled Korean nerds used to having their dicks and clits sucked constantly through the TV screen have a big old cry.  People complain about my blogging being condescending all the time but the fact is that my satirical talking-down to cunts is nothing compared to the ridiculous dumbing-down that k-pop media enforces on viewers, who lap up the emotionally fraudulent presentations of their idols unquestioningly (as long as everybody plays by the rules).  K-pop TV treats you like you’re a stupid cunt who actually believes that everything in these groups is happy families all the time.  Hwayoung never showed any determination to burst this particular bubble.

Here’s Sulli and Krystal in an interview that was hugely controversial.  Why?  Because the girls didn’t smile 100% of the time, and occasionally let their real emotions (i.e “wow this is the tenth interview today, fuck I’m bored, cao ni ma”) slip out.  These girls are over the fake bullshit that they’re paid to do all day, every day.  Unlike Hwayoung who only had a few months of idol bullshit to contend with before being thrown away like the dead wood from a fireplace, Sulli’s been doing this bullshit for a lot longer and is a lot more over it.  Imagine having to smile at work like an air hostess does, all the time.  Now imagine that this work never ends – you have cameras on you at almost all times, superiors to impress, reality TV shows following your every piss, shit and wank, and a constant facade of a perfect k-pop angel to deploy over the top of your real personality.  If you’re anything like a normal person you’d be ready to go postal on some cunts a few weeks into it.  Just look at the psychological meltdowns people have on lame reality TV shows where people are cooped up in a house for only a few weeks together, forced to endure personalities that rub each other the wrong way, and can’t leave.  Now imagine that environment is your entire fucking life.  Those people in that room should be grateful that Sulli only didn’t smile a bit, I’m not sure in her shoes if I’d have high enough determination levels not to take out a kitchen knife and start stabbing cunts in the face for breathing.

When the T-ara controversy hit in 2012, one of the wackiest, most deluded conspiracy theories being spread around at the time by oxygen-wasting losers was that Hwayoung had buried secret messages somewhere in her tweets, that could be deciphered by reading them vertically, as you can see by the screencap above made by some fucking barking mad nutcase.  The tweet above supposedly says “only fans know (the truth)” if you read the first column vertically, but the value of the message as anything more than coincidence is easily disproved because what characters fall into that column depends on what you read it on.

However, people with true attention to the details that really matter will notice something else about Hwayoung’s tweets in the first picture, something that should send shivers down the spine of any mortal on this planet concerned about responsible social networking by Korean pop idols.  Can you see it?  Pay attention and look very closely!  That’s right it’s…

…one of the most severe examples of EXTREME FUCKING DUCKFACE in k-pop.  This tweet here says “facts without truth” but perhaps it should say “duck without water” given that her agency told her to waddle off.  Clearly Hwayoung is nothing but trouble and needs to curtail her Internet use until she can learn to not post mega-ugly duckfaces that make people lose their lunch.

Hwayoung would do well to adopt Sulli’s social networking policy.  Take a look at this post from Koreaboo and all of the many tweets in it.  What do all of the tweets have in common?  If you answered “these tweets aren’t from Sulli, they’re from some stupid psycho cunt and some other idiots who are dumb enough to actually give her the time of day” then congratulations, you are correct!  As it happens, Sulli posts very rarely.

The tweet from Sulli here says “it’s been a long time” and it certainly has.  Sulli clearly doesn’t give a cao ni ma about social networking, posting stupid duckface photos and responding to dickheads, she’s too determined to have a good time nightclubbing, ironing Choiza’s shirts and holding hands and thinking pure thoughts.

It all adds up to a world of difference… in determination levels.