It’s been two years since the birth of Kpopalypse blog!  Time to celebrate with all you lovely readers and bring you a post with statistics, search terms and cake!  Yay! 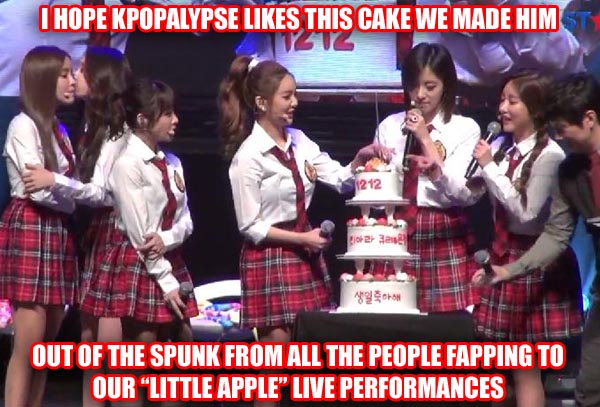 Blogsites collect a shitload of data about the people who visit, why they visit, where they go and what they do.  This collected data is called “metrics” and it’s used a whole lot by many online content providers to refine their content, and it’s even bought and sold between companies because it contains valuable demographic marketing information (and yes those companies can do that – you gave them permission to in all those EULAs you never read).  However Kpopalypse is different, because I’m going to give you all my data for the year, right now, for free!  Read on as Kpopalypse spills his demographic secrets (tl;dr – you like tits) and answers relevant questions!

Firstly, people are always asking me about this shit, so here’s the countries that visited Kpopalypse blog most often in 2014, and roughly how often (take all numbers in this post with a grain of salt, they’re not exact).  All these countries are in my “I love you guys” list with more than 1000 clicks each:

Definitely a strong theme of “fap” is emerging as the main drawcard here.  Obviously articles which were published earlier in the year have more chance of getting on this list than more recent articles (like the very popular part 2 of the boobs post) just due to having more time to accumulate traffic, so don’t take these stats (or my blogging as a whole) too seriously, because I sure don’t.

What were the most popular things for people to click on to explore once they’re on the Kpopalypse site?

The most popular Youtube videos you guys clicked were Eat Your Kimchi’s review of f(x)’s Electric Shock because Martina’s boobs looked nice, and a review of the Bombshell bra which allows girls to go up two cup sizes.  It seems you folks all know what you want, and it’s boobs.

The other links in the list are self-explanatory, perhaps except for “WordPress.com media” which refers to pictures embedded in or linked from my blog posts, that I’m actually hosting myself.  The grand winner here was a link called jiyeoncam.jpg that apparently none of you could resist – should I be concerned about this?  Click the link, you decide… what am I saying, you’ve already clicked it, you know what it is, I’ve got the numbers to prove it.  Runner-up was this picture of JAV star Julia who you presumably clicked for a good fap or perhaps a right-click to save to your hard drive and then a good fap.

The most common source of traffic to Kpopalypse blog in 2014, just as with every other website on the Internet ever, was Google.  But what did you guys type into Google to find it?

Now I’m going to answer some of the important queries that people typed into Google search during the year, that wound them up at my blogsite:

My professional boobs pervert opinion: Raina – B, Lizzy – B, Nana – A

It seemed people noticed that the Crayon Pop’s boobs “got prettier”.

I think it’s just lots of padding.  You can fit anything under clothes like that.  Knowing how those girls roll I reckon they’ve probably got switchblades stashed in there.

did kris from exo have laser removal on a tattoo

I couldn’t give a shit personally but here’s one theory, make of it what you will.  Prepare tinfoil headwear.

kpop idol groups that are the worst live

I’m tipping now-forgotten nugus Chocolate as the worst one I’ve seen in a while.

what are the differences between kpop and the beatles

ways to curb drug abuse in the music industry

which kpop stars are virgins

And only them.  And even that’s a maybe.

kpop idols having sex with fan

I’ve heard that it happens.

Finally, someone who has come to the right place!

I’d also like to say thank you to the sites that I write for, Anti Kpop-Fangirl and Asian Junkie, who have both been great and continue to be great about hosting my writing.  Also thanks to all those who follow the Twitter and ask.fm, support the radio show, anyone who ever posted my articles anywhere, or even anybody who just reads my articles and has found them useful in some way.

Finally, thanks for visiting and supporting Kpopalypse during 2014!  My writing has become popular far beyond what I ever expected, and also far more hated than I ever expected – both of which I think are great outcomes!  Also, if you like Kpopalypse, why not send a postcard?  You can send postcards to here:

Send anything you want but be aware that I don’t open the mail and all correspondence gets checked so don’t send anything that you wouldn’t feel comfortable about a receptionist in an office reading.  If I get enough quality postcards, I’ll do a blog where I scan and show you them all!  By sending a postcard you consent to this process so please don’t send anything you don’t want the world seeing!  Kpopalypse will be back in 2015 with more posts… plus there will be a few more posts to wrap up 2014!  Continue to enjoy k-pop, k-pop blogging and new year festivities!  Don’t forget to eat cake!

7 thoughts on “Kpopalypse anniversary and metrics post for 2014, plus thank-yous and postcard fun!”