That’s right sluts, it’s time for another episode of: 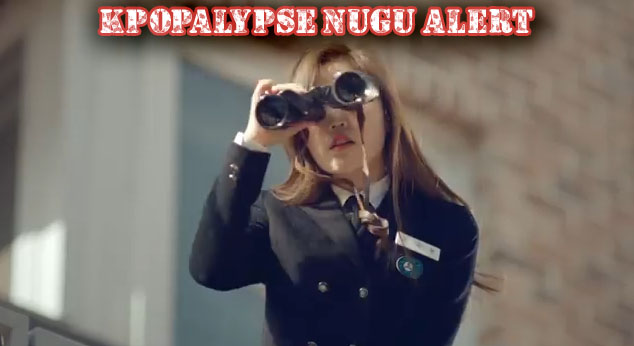 The regular blog series where Kpopalypse brings you fresh/stale nugus for your enjoyment and/or bemusement!  Read on as I shove down your fucking throat another group of k-pop performers that you don’t care about and will probably forget the names of as soon as you’re finished reading this, in the name of good humour and a misguided unrealistic belief in music industry equal opportunity.  Let’s get started!

Observant followers of Kpopalypse will notice that I don’t like k-pop ballads very much.  I don’t understand the fascination others have with ballads – uptempo cool songs were what got every single one of you reading this right now into k-pop in the first place so why some of you people actually pretend that you want to spend more than five seconds of your time listening to ass-felching shit-gorging turd-munching slow tender love songs for vacuous brain-dead superficial fuckwits is beyond me.  But hey – I’m all about catering to popular opinion and not wanting to offend any stupid fucking cuntholes so I can be as most liked as possible by everybody at all times, so here’s some random ballads so I can be more popular like Zico and G-Dragon.

Usual Nugu Alert rules apply: less than 20k YouTube hits, less than two of your friends know/care about them.  Let’s start with:

The word “Kiz” seems to be the stamp of nugudom for any k-pop group, and any startup k-pop agency would be wise to not bother putting the word “kiz” anywhere in their debut group’s name lest they jinx them heavily.  Let’s look at the track record of groups with “kiz” in their name:

So it’s a bold agency that debuted Atomic Kiz, the latest cookie-cutter five-member boy group that will probably be erased from your memory by this time next week when some other near-identical cookie-cutter five-member boy group comes along, if they haven’t already done so by the time you read this.  The super bland acoustic ballad certainly doesn’t help their cause to become known, nor does the fact that they look like they’ve all been dressed by their mothers and that whoever’s controlling the camera seems to have trouble keeping them in focus for some of the group shots.  Maybe the plan was to go for some sort of 80’s soap opera style soft-focusing to increase the romantic mood but the overall effect just looks like one of the boys themselves set up the camera depth himself before pressing “record” and bumped the focus control a little bit too far before running back to stand with the others.  I bet it was that guy wearing the sunglasses indoors who no doubt can’t see shit, because he also seems to be having some trouble getting his dance moves in sync with the rest of them.

Atomic Kiz furthermore carries with them the ultimate nugu stamp, that defines all nugus as nugus in the true k-pop industry sense of the word where music sales don’t mean shit but attracting sponsors is everything: 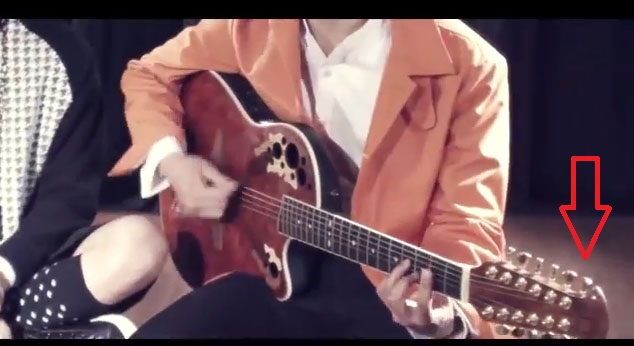 Lack of sponsorship.  Where the arrow is pointing, the logo on the headstock of this guitar has been pixellated out.   The guitar has the design of an Ovation guitar but chances are that it’s a cheap copy by a Korean company like Crafter that nugus tend to use because who’s got the bucks for an Ovation… either way, they get no promo from Atomic Kiz because they didn’t want to help fund this MV.  I don’t know why not – judging by the way the finished product looks it would have cost them less than the price of changing the strings on that instrument.

Notable attribute: entire group and song so dull that they are upstaged by an unusual-looking bookcase in the final scenes

The title of this song is weird because after the first bass drum hit there is actually a second or two of silence before the snare drum comes in.  I thought for that tiny second they were going for a very literal interpretation of the song title like John Cage’s “4:33” but then the actual song kicked in with proper music (kind of) so I guess not.  The whole thing isn’t bad musically if a little dull, and it even has some seriously oddball heavy guitar in the loud bits that sounds a bit like a doom metal group got together with a k-pop singer and they had a bit of an argument about musical style so they all decided to meet each other halfway, which sounds like the latter-day careers of a lot of doom metal groups now that I come to think of it.  I guess it might make an impact on you if you’ve never heard anything like this before, but I think if you want shitty half-assed doom-pop you might as well forget Korea and go out and buy something from The Gathering or whatever.  The video is boring as fuck though, with lots of pointless wandering through the deep mystical forest, pouring water on things, mutilating the local flora for no apparent reason and general angsty standing around looking at nothing in particular.  Also, did you know that there are over 9000 moving parts inside a piano?  You soon will, because the video director of “Silence” seems intent on showing you each and every one of them.

The guest Rumble Fish isn’t completely nugu and quite a few of you older k-pop fans will have heard of her (or her band of the same name), but Magic Flow sure is straight from N-town.  Do you know how hard Magic Flow is even just to find?  A search for “Magic Flow” on YouTube just got me a bunch of Mexican rap kids and some stupid hippie Earth-mother ecstasy-taking bullshit music, but luckily my powers of nugu detection were up to the task so I can now present to you this distinctly average and forgettable ballad, which won’t be stuck in your head after you play the video because it’s not catchy in the slightest.  Mr. Flow only managed about 15k hits even with Rumble Fish’s nugu-boosting help, and 15k might seem like a lot compared to the other videos here but this isn’t AsianDreamVOD, the perfectly-titled-given-its-quality “Blah Blah” has been sitting on mega-distributor 1theK’s YouTube channel for over three and a half years.   That averages out to about 10 hits per day, and it’s such a low priority for 1theK that they couldn’t even be fucked subbing it into English like everything else on their YouTube channel.  You can tell that this video is a few years old too because there’s actual lip-to-lip contact in it, something that k-pop videos seem terminally afraid of these days.  In 2011 a guy and a girl could politely peck each other on the lips in a music video, but not anymore – why so puritanical, Korea?  Maybe there was a massive herpes simplex epidemic in Seoul that I hadn’t heard about, and struggling to contain the outbreak, the government decided that all they had to do to contain the issue and ensure that their problem would solve itself easily was to remove fictional representations of relationship skinship in music videos.  Even this hardcore relationship-porn with an established star didn’t do much to help Magic Flow achieve his k-pop stardom dream.  1theK learned the true power of nugu-boosting a few years later when they teamed IU with both Fiestar and HIGH4, but their skills came too late for Magic Flow who is probably busy right now magically flowing some tap beer into pint glasses to pay off his nugu debts.

Notable attribute: wedding ring at the start of the video probably represents majority of the MV budget

This concludes another edition of Kpopalypse Nugu Alert, the blogging series that you love to hate to love!  This is also the last Nugu Alert for this year!  Kpopalyspe will return with more nugus to annoy you in 2015!