Sport.  I’m against it generally, and I’m even more against it in k-pop.  This post is about why sport and k-pop need to remain separate, and I’ve made it because it’s one of those things that people are always asking me about.  Usually I just say “I’m a musician – sport is against my religion” when people ask but since you blog readers are so lovely I feel like I owe you a little more detail and entertainment than that.  Also I’m not seeing anyone else blogging about this shit and it’s a Kpopalypse specialty to brazenly wander into topics that other bloggers won’t touch with a ten foot T-ara lightstick for fear of being cyber-stoned to death by the Internet hordes. 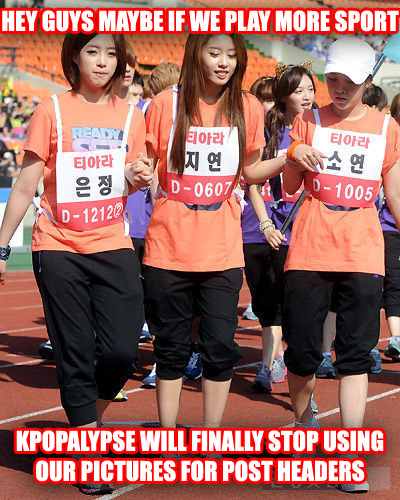 I don’t know what it’s like in other countries, but in Australia, sport is a big thing down here and probably the biggest cultural pastime that we have besides getting incredibly drunk and having outdoor barbeques every month of the year.  (I know what you people from other countries are thinking, especially those of you who had to endure Paul Hogan’s horrid tourism advertising, but “shrimp on the barbie” is an advertising line for foreign consumption only – in Australia we don’t even call them “shrimp” and most barbeque is sausages and kebabs because prawns that are big enough to not fall through the metal cracks in the barbeque grill are just too fucking expensive.  Oh look at me getting all sidetracked and it’s only the opening paragraph.  I can already tell that this is going to be a weird post.)  No matter where you go in Australia, you can’t avoid sport, it’s fucking impossible because that shit is everywhere.  Believe me, I’ve tried – it can’t be done.

Growing up I noticed that only my school’s total fuckheads were good at sport so I drew the sensible conclusion early on in life that sport sucked a bag of dicks and I didn’t want any part of it so I logically took refuge in the world of music.  Music is sport’s natural arch-nemesis, the Yin to sport’s Yang.  Key contrasts between the worlds of sport and music include but are not limited to the following:

It’s obvious to me that sport and music exist on opposite ends of some kind of “leisure spectrum”.  You’re either really good at music, or you’re really good at sport, but if you try to be good at both your interest and participation in one activity will always be compromised by the other activity in some way.  Want some relevant k-pop examples?  Sure you do.

Sport and k-pop should not mix example 1:  Wassup’s “Fire”

We can see the negative mix of sport and music here in two ways.

1.  It negatively affects the music.  The song is shit.  There is sport in the music video.  Wassup aren’t usually quite this bad, so therefore, it’s sport’s fault.

2.  It negatively affects the sport.  Wassup are apparently one of the biggest k-pop groups in Brazil. and their song was made to cheer on Brazil (not Korea, because Wassup troll k-netz for laughs just like me) in the World Cup.  Gosh, that didn’t work out so well, did it.  Coincidence?  I doubt it.  Brazil’s unusually poor sporting performance in the 2014 World Cup is obviously related to the Brazilian team jerking it too much to Wassup’s video – and who can blame them?

Clearly, it would be best if music and sport were kept far apart.

Sport and k-pop should not mix example 2:  Idol Star Athletics

My guitar students are always getting injuries from stupid fucking compulsory school sport and having to take time off from my lessons to heal their broken arms and hands.  I keep telling their parents “tell the kid to not attend sport at all, sport is Mickey Mouse bullshit, it won’t help their career – write the little shits a note to give to their Phys Ed teacher saying that the kid has got terminal ass cancer and is exempt from all sports games on doctor’s orders” but it never works.  The parents always just mutter something about “needing exercise” as if sport is the only source of exercise that exists and refuse to heed my advice… then the kid just breaks another arm a few weeks later.  So much for the supposed health benefits, I must have missed the memo on how it’s so fucking healthy to break a new bone in your body every two months.  Likewise, stupid Idol Star Athletics in Korea injures fappable k-pop performers like AOA’s Seolhyun, preventing their appearance in comebacks.

This is obviously not acceptable.  Seolhyun isn’t even my fave but AOA is a rare group where every member meets required standards and we really need all hands (and boobs, and asses, and legs, and…) on deck to maximise music appreciation.

Sport and k-pop should not mix example 3: Super Junior’s “Victory”

Here’s Super Junior back in 2010 milking the success of “Sorry Sorry” for the 153rd time, using the same dances and rhythms that we’ve heard from them ad nauseam with minor variations, I guess even SM realised that some shitty soccer game wasn’t worth the effort of writing a whole new song or coming up with any new ideas.  No need to mention how much motivation to perform this shitty song gave the Korean team of course, we already know.  Shit tossed-off song, shitty team performance – everybody loses when sport and k-pop mix.

Sport and k-pop should not mix example 4:  Hyomin fap 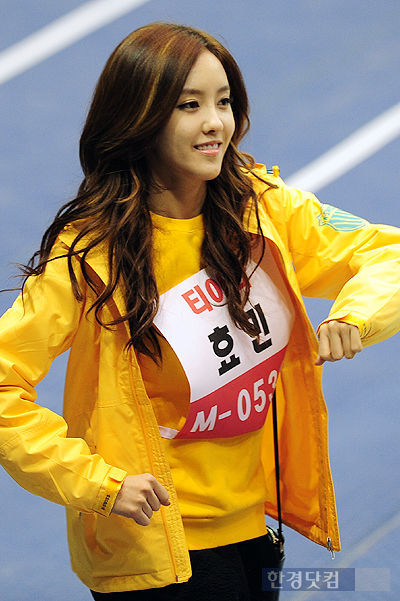 Sport and k-pop should not mix example 5:  Ailee’s “Fighting Spirit”

So between creating web traffic for 6Theory and singing dicksucking western pop ballads Ailee recorded a World Cup song this year and it’s more listenable than the last couple of feature tracks she’s done but then so is just about anything. Of course because it’s for a sport thing she has to dress as unflatteringly as possible so she doesn’t make ugly fat couch-potato TV sport addicts feel bad, which is reason enough to add this song to the list of reasons why k-pop and sport shouldn’t be together.

Sport and k-pop should not mix example 6:  Orange Caramel fap

I find the soccer ball patterns on the front of the costumes confusing to the eye, it makes it hard to make out the contours of the Orange Caramel member’s boobs underneath the clothing.  Obviously if they weren’t performing for some World Cup bullshit the patterns would be different and the opportunity for fap wouldn’t have been squandered.

Sport and k-pop should not mix example 7: Music Fucking Core

Does anyone with a life actually give a fuck who wins and loses what on a music TV show?  Of course not, if you have half a brain in your head you only care about if you like the song or not and you’re just happy that your favourite group was able to get on the show at all to perform the song so you could watch them.  However to the world’s fuckwits, winning and losing on shows like this is terribly important, and that mentality comes from applying a sport-based competitive attitude to music.  I’ve blogged before about why music competitions are all bullshit and nothing has changed since then… as if EXO’s “Growl” beating out Crayon Pop’s “Bar Bar Bar” wasn’t enough of a tipoff that something’s amiss.

Sport and k-pop should not mix example 8: Akdong Musician’s “Give Love”

See what bullshit music we have to endure because people win music competitions?  Moving right along.

Sport and k-pop should not mix example 9: Shindong in a karate uniform

Scarier than a drop bear, and possibly twice as hungry.

So that oughta do it.  If these nine points haven’t convinced you of the strength of my argument, nothing will.  Of course if you love sport then all is well and good just keep it the fuck away from music because those two things shouldn’t be mixed.  It’s like crossing the streams in Ghostbusters – you just don’t do it.  This has been a Kpopalypse Community Service Anouncement.

5 thoughts on “Sport and k-pop should not mix”