The Kpopalypse survey results are in!  Time to share them with you, the lovely readers! 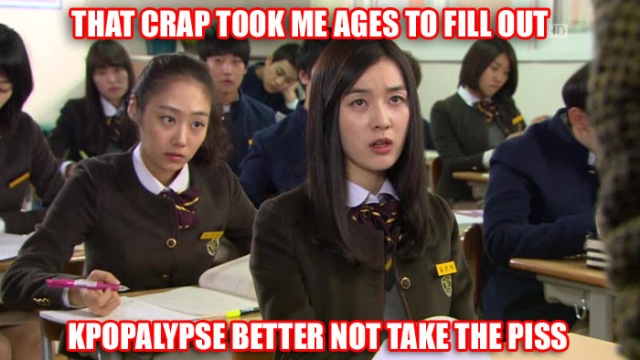 I discussed the results on the first of the two Easter livestreams as well but for those who missed it, who don’t follow the livestreams, or who would just like to see it all written down, all the data is in this post for your obsessive-compulsive scrutiny!

I tried to mix the questions up between things I actually wanted to know and fun stuff to keep you entertained and filling out the survey.  It must have worked because over five hundred people filled it out – wow!  Thanks to all your replies, I’ve got lots of awesome data about my blogging now. Here’s what I found out:

Question 1: Hi. How are you? Answer in as much or as little detail as applicable.

Most people were pretty good, which was nice to see.  For those who asked, I’m great!  A few of you wondered if I actually gave a fuck or was just being a dick or whatever.  Actually I sincerely care about all my readers and that’s why I spend tons of my free time posting blogs for your entertainment.  Yes, really.  Moving on…

Question 2: How did you first find out about my writing? 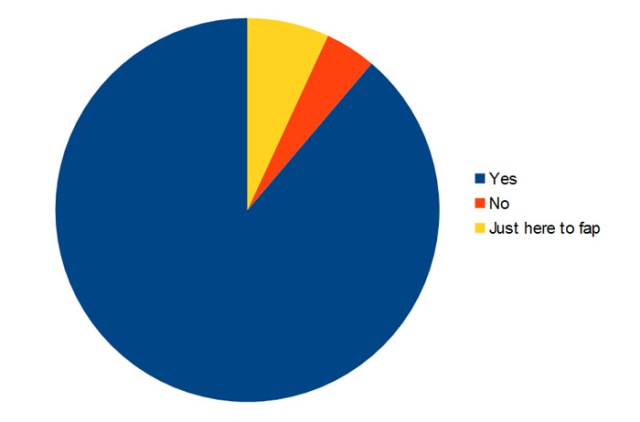 Actually I think the proportion of fappers is way higher judging by the amount of hits various articles I’ve written get, however those who are rigourously fapping probably would also have a harder time filling out online surveys with only one hand so this probably skews the figures somewhat against them.  You’ll find that the “fappers too busy to fill out surveys” theme repeats itself in later questions.

Question 4: Is the sense of humour in my writing style a problem for you? If so, please use the white space below to cry about it in a humourless fashion.

The overwhelming response from those who chose to type a text comment in this open-ended question was that you liked my humour and didn’t want me to change anything.  One survey respondent asked:

“Wait.. You have people that read your articles/blog posts whatever, but don’t like your writing style, but still read them?”

Yes I do!  Check out some juicy humourless Reddit butthurt… and this was in response to one of my tamer articles.  No, I don’t understand why they read my shit either.

Question 5: Please tick the three features of my writing that you personally enjoy the most.

Reviews (17%), technical posts (19%) and general observations about k-pop fandom lameness (18%) were the clear winners here.  Not many of you really give much of a fuck about livestreams, which is fine because that’s more of a niche activity anyway – consider it bonus content, not the main event.  I suspect once again the “fap” category is artificially skewed in the negative due to fappers not having the necessary hands free to fill out surveys, as on any given day my articles tagged as “fap material” are scoring about double the amount of hits of other articles.  Here’s a chart showing the actual amount of hits on articles, by category, over a given timeframe: 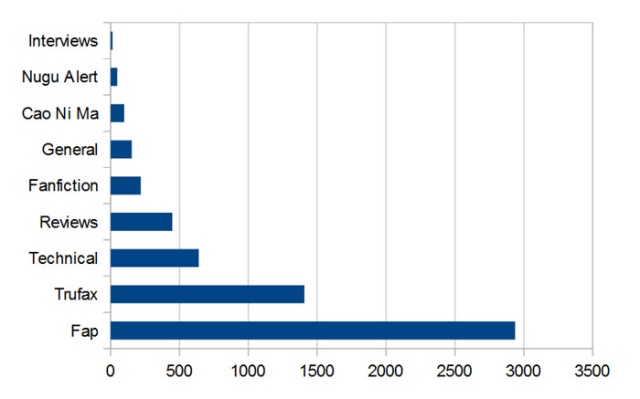 Question 6: Given these options, which hot k-pop girl would you like to see me write a feature on? 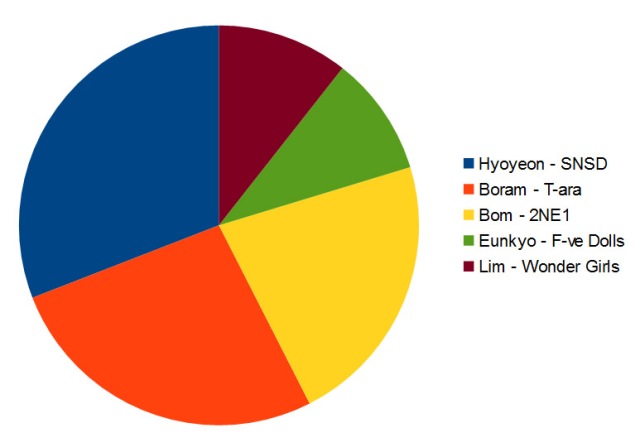 It was good to see my readers rising to the challenge of this difficult question (although I did make it mandatory so I guess you didn’t have a lot of choice if you wanted to complete the survey).  Hyoyeon won the poll with 30.9% of the vote, Boram was close behind with 26.5% and Bom also not too far away, collecting 22.5%.  Then it was a fairly big jump down to Lim with 10.5% and Eunkyo with 9.6% of the vote.

Question 7: Are you happy with the frequency of Kpopalypse posts?

I wish I could increase my posting frequency but that would cut into the things I do to earn money, and probably only a crazy person would ever pay me to blog so it ain’t happening.  Keeping it as-is, I can do that though.  Not many people wanted me to post less, perhaps I should have shared this survey on Reddit or Netizenbuzz to get more haters, but then they probably would have refused to fill out the survey anyway.

Question 8: Have you ever fapped to any k-pop videos, pictures and/or GIFs that I have posted?

Most of you do not fap.  Suuuure.

As for the “I would if…” category, quite a few of you wanted more guys to fap to.  Since I don’t really know what gay dudes or girls like, I might have to put in some more questions relating to this in a follow-up survey.  Or maybe I’ll just continue to post boobs as per usual.  As for people requesting the ladies, Sunny was popular.

Question 9: If train A with KKS on it leaves the station moving at 60 miles per hour and train B leaves one hour later with Wellmade Entertainment staff on board moving at 85 miles per hour, how long will it take anybody to start giving a shit about Hwayoung? 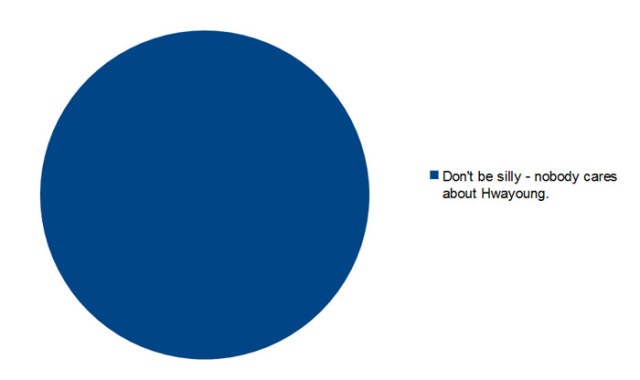 Question 10: Who is more gangster?

Despite Hyoyeon‘s recent exploits, Way scooped the gangster crown with exactly 2/3rds of the vote.

Opinion was sharply divided on whether f(x) were being neglected by SM, but everyone agrees that the fan reaction is fuckin’ hilarious.

Question 12: When you read some gossip article on Netizenbuzz, who do you believe?

Most people were fairly rational about their perceptions of translated Netizenbuzz articles and reactions.

Respondents were asked to rate the following fanfiction scenarios as either awesome, meh or shit.

T-ara was the least-favoured scenario, but also the least shitty scenario, collecting the highest amount of “meh” responses.  Lowest overall score once factoring in averages was for the U-KISS scenario.  Highest overall average score was for G-Dragon who scored highest on the awesome scale and also fairly low on the shitty scale, however whether that was because the scenario was better in quality, or just because upset fangirls visited the survey and got a case of the butthurts and bumped up the shitty scores for their biases I’m not sure.  Relax, everybody – the scenarios are fictional!  Also, none of the scenarios will be used for an upcoming post, they were just examples of the kind of thing I could write about, if I wanted… you KissMe’s and Pink Pandas both dodged a bullet here, be grateful…

Looking at overall figures gives me a general idea of how people feel about my fanficiton writing.  More love than hate, however it’s definitely not as well-received as some of the other things I write about.  That’s why I only write one fanfic every couple of months.  Those who enjoy the fanfics rest assured I’ll keep doing it, haters also rest assured that the frequency won’t increase because I’m honestly just too lazy to write more.

The real answer was 33.3% but nobody gave a shit (apart from a few of you mathematical bright sparks who were upset that the correct answer wasn’t one of the options and typed it into one the other free-text questions instead).

Possible options: “Suffocated by Sunny’s boobs” “Concussed by Clara’s boobs” “You turn into a carrot, are chopped up and put into a salad which is fed to After School” “During gymnastic lessons from f(x)’s Victoria you break your spine and dick simultaneously and bleed to death” “Seungri spunks into your nasal cavities causing respiratory failure” “Accidentally leave CL’s The Baddest Female on repeat while sleeping, wake up with brain hemmorhage”. 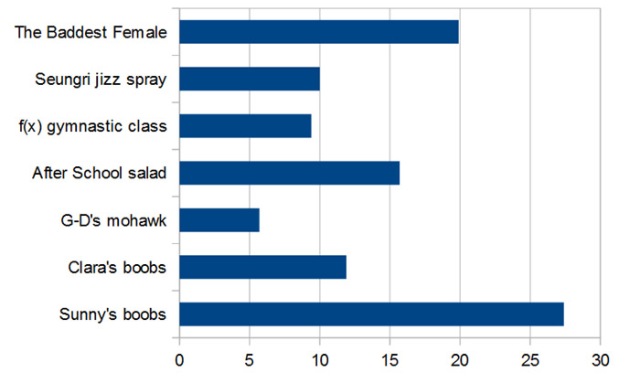 Unsurprisingly, being suffocated by Sunny’s boobs in the style of Chesty Morgan in “Lethal Weapons” was the clear winner with 27.5% of the vote (that’s 13.75% per boob).  Amazingly, 20% daringly chose “death by CL solo” – you brave, brave people.  G-Dragon’s mohawk was the most unpopular death method, meaning that his hairstyle may have potential peacekeeping or military applications.

Question 19: What concept should Crayon Pop or Orange Caramel try next?

With a selection like that it was a close race, but “bored brothel receptionists” eventually pulled into the lead, and I would agree that Orange Caramel would roleplay this scenario very well.  Nobody wanted to see Crayon Pop deal shitty cut-price heroin substitutes though, I guess you all decided that they were already gangster enough.

Question 20:  What keeps you reading my longer blog posts? Tick all that apply. If you find them tl;dr feel free to skip this question, although how the hell you ended up managing to read this far down the survey in the first place is anyone’s guess.

Sense of humour was the big one, which gives me confidence that my haters who complain about it just have a bug up their ass because they can’t think up any good jokes.  Oddly, many of you also actually cared about my opinions.

Question 21: If you hate Kpopalypse please provide a short summary of why you even bothered to click this link at all plus any suggestions for blogging improvement. You might as well go for broke here because it’s not like I’m going to listen anyway so feel free to get it out of your system. Please note that submissions displaying sufficient levels of mental illness and which include both a valid name and a legal postal address may qualify for a care package.

Sadly, nobody bothered to write hate comments AND a valid name and postal address, so the mysterious care package remains unclaimed.  Maybe next time?

I find that this kind of age split is fairly reflective of the age demographics of k-pop overall, so it shows me that I have a typically broad age range of readers.

Question 23: Thanks for taking this survey! Anything else on your mind, don’t type it in the text box below, just use the comments on the blogsite like a normal person. Thanks!

Of course nobody bothered to follow this instruction, many of you asking variations of the following:

I took this survey, what makes you think I’m a normal person?

Damn.  There’s no getting past you cao ni mas with my sneaky Catch-22 questions.

So that’s the end of the survey.  Some people had questions that they typed in the various open-ended fields, but I won’t answer them here.  Use the comments below for that, or ask.fm if you wish to remain anonymous, however a lot of your questions were actually already answered in the Kpopalypse FAQ, so be sure to read that if you haven’t.

Because the survey seems to have been such a popular idea, I’ll probably make this a periodic thing.  Don’t worry, not too often… just enough to keep things fun.  You don’t mind, do you?

8 thoughts on “KPOPALYPSE survey – the results!”