There’s an amazing shitstorm brewing about Hyoyeon and SNSD at the moment, which at this stage may or may not blow over, but I’m not going to write about it.  After all, I’ve already written a post about how confirmation bias works so you should all know what’s really going on, plus every second post I’ve ever made ever has probably got some little dig in it about how fucking stupid netizens were about T-ara and about how equally stupid a lot of international k-pop fans were for going along with the rumours at the time instead of using some intelligence.  So now it’s SNSD’s turn on the chopping block and I bet any Sones who vilified T-ara back then are now feeling appropriately stupid now that they get to experience the same situation from the other side.  Here’s hoping they’ll learn something from the experience about not believing any old bullshit on the Internet.  Probably not, though.

And that’s all I’ve got to say about that specific situation.  Others will probably say more.  However there’s something else at the root of this kind of thing which I believe is worth discussing – “cute” concepts.

The roots of the hatred towards girls groups in general (and thus the ability/will to believe any old bullshit) are fairly obvious.  Crazy fangirls with ovaries only for oppa don’t like sexy girl groups (because they perceive them as a threat to their male k-pop crushes, or the desires of men in general) and will use any means to take them down a peg to shorten the perceived distance between their fugliness and the pristine idol-image, and in the process will embrace massive amounts of sexual conservatism.  Only sexual conservatism for the girls in k-pop, of course – guys are still allowed to take off their clothes, be as sexy as they want to be and even have gay love affairs (real or fictionalised)… that’s just fine – as long as girls aren’t involved.  Some fangirls will be honest about their feelings and just say “they’re seducing men from the stage, I bet they’re also seducing my crush backstage”, whereas others will lie and adopt a pseudo-feminist pose and complain about the girls being “exploited” but it’s all the same thing underneath the surface.

It’s natural then that female fans will embrace “cute concepts” that they perceive as safe and non-threatening such as the new Apink song.

3. [+871, -82] They’ve been going with the innocent concept for a while. It’s hard to stick to one concept like that but they know what we want ㅋ

Oh snore.  How little do they know.

From a crazy fangirl’s perspective, there’s a sliding scale of concepts, from “cute/innocent” on one end, to “sexy/perverse/slutty” on the other end.  To them, things probably look something like this:

However, that’s not how the men that these fangirls are concerned about getting whisked away into k-pop fap delirium (or worse – actually falling in love with a k-pop idol) perceive things at all, so they needn’t worry too much about exactly which group is where on the sliding scale.  Here’s now a representation of the male mind when it comes to female k-pop groups and concepts in general which should clear things up and let fangirls know exactly how much concern is warranted: 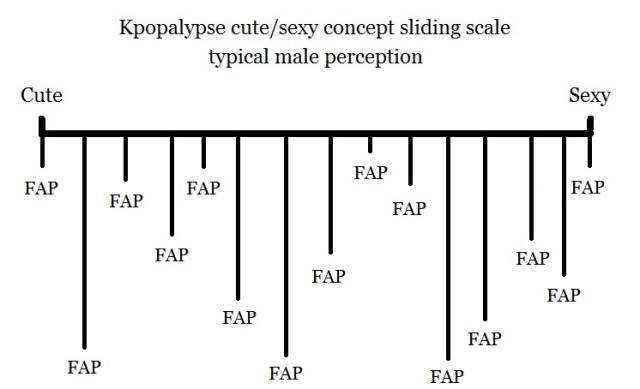 Every guy has different tastes and is turned on by different things, and you can bet to every guy fapping over Stella’s “Marionette” there’s another one jerking it to the new Apink.  But there’s one constant – for every graduation on the sexy/cute scale someone is fapping.

Most guys and girls have hit puberty at about 12 or 13 years of age – just when they start high school.  Whether you’re a guy or a girl, if your sex drive is kicking in as strongly as it does for the majority of folks, from that age until when you graduate high school you are horny as a motherfucker but legally in most countries you are not allowed to fuck anybody.  Plus being young you’re possibly lacking in social skills required to get anything much happening anyway.  If you’re in any sort of co-ed situation (or gay/lesbian) you’re surrounded by things you want to fuck.  Most people graduate from this sexual prison into adulthood having achieved a slim minority of their sexual fantasies at most, hence the school uniform becomes representative of sexual fantasy and unfulfilled forbidden desire… and there’s no better way to make people want something than to wrap it in a package which says “you can’t have this”.

My comment on the Apink “Mr. Chu” article quoted above: 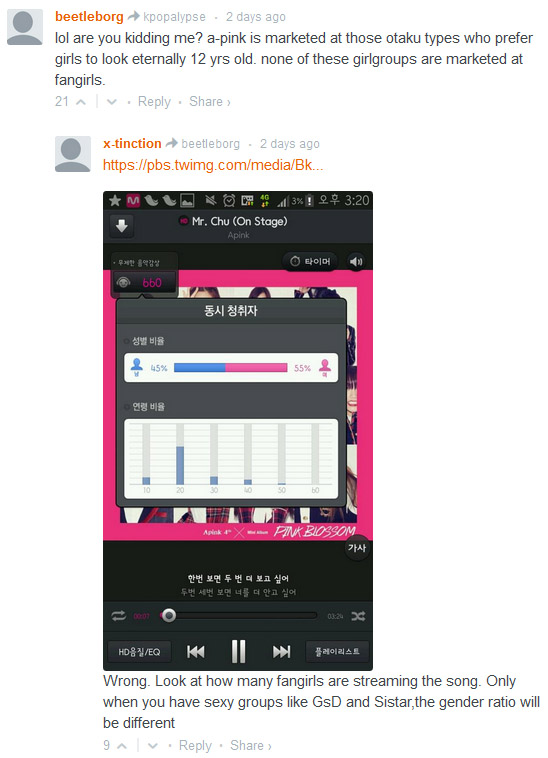 F-ve Dolls’ “Can You Love Me?” video is very telling:

Notice how in every scene where the girls are wearing school uniforms, Dani is wearing something that looks a little bit less like a school uniform and more like some wacky kiddy circus costume?  That’s because you’re not supposed to fap to Dani, she’s too young… you creep.  The adult girls get the hot schoolgirl fetish wear and the only girl in the group who actually is a schoolgirl wears some weird clown shit instead so she doesn’t interfere with your fantasy and you can ignore her while you work up a rhythm to your fave.  It’s all part of the plan to keep you fapping consistently.  Yet another thing you can thank KKS for, along with all the other great things he’s done for you like removing Hwayoung, keeping T-ara going, giving Seunghee a career etc etc.

And let’s not forget SNSD;

Watch it all.  Try not to fap.

Let’s move on to:

Picture this: you’re fapping furiously to Girl’s Day’s latest cumback when suddenly you hear a cracking sound, and then you can’t move your body at all without incredible pain.  You call the ambulance and they take you away to hospital where it’s discovered that you’ve broken a pelvic bone – every fapper’s worst nightmare.  You spend the next week completely immobile.  A nurse has to change your bedpans, change your clothes and sheets, wash your asshole and so forth – and you’re not allowed to move your body and definitely not allowed to fap until you’ve healed.  The presence of the nurse quickly becomes associated with the pleasant sensation of her washcloth cradling your testicles, which is the closest thing to a sexual experience that you’re going to be getting for a while.  Soon, the sound of her footsteps down the hall brings about involuntary boners as you anticipate the warm tinging feeling of another clean-up session.  Every now and then a doctor comes and assesses your pelvic area, poking, prodding and inspecting for signs of healing.  Then the nurse has to clean you up again.  Both the nurse and the doctor are female, too… your sexual frustration reaches new heights that you never thought possible.

This is how an attraction to doctors and nurses gets hard-wired into the human brain and why it’s such a common thing.  It’s also why every damn music video and movie ever always has “sexy nurse” outfits instead of the boring shit that they actually wear to work.  Check this video out at 2:56:

That ain’t no standard regulation nurse outfit, that getup is straight from Adult Superstore… and this is for what’s supposed to be a video for a touching ballad!  Rest assured that Girls’ Generation’s “Mr. Mr.” is clocking up some major jack-off hours thanks to its “doctors-and-nurses meets Frank from Blue Velvet” concept.  If you added together all the time that everyone in the world spent jerking it to The Nine’s latest, end to end it’d probably stretch back to the Triassic era and the first guy would be jerking it with the dinosaurs.  Maybe even earlier if the MV wasn’t also in Triassic-era screen resolution.

Soldiers and tanks and shit get people wet, and I’m not just talking about blood spilling out of the gaping wounds of women and children caught in the crossfire.  Everybody knows that army/navy/airforce shit is pure sex, otherwise nobody would ever want to even join up for that shit. Every military-themed concept ever is a sexy concept.

And of course just like with any “non-sexy concept that is really a sexy concept” SNSD are right there, at the front lines:

Concepts combining hot k-pop girl sexuality with military-inspired fashion and equipment have become so common that militaries around the world are taking notice and are using the power of sexy themselves.  Check out this great advert for the Ukranian military which lays it on the line.

I think the whole horrible Ukranian situation is going to escalate and then culminate in a gigantic sexy-off between the soldier in the above video and Crimea’s new Attorney General:

Look at Apink being all cute and innocent, looking like brides all about to get married off.  Doesn’t it just warm the heart?  Isn’t this the most beautiful video ever?

Well, it also warms something slightly lower down than the heart, because in the ultra-conservative la-la-land many k-pop fans live in your wedding night is the night that you get some dick for the first time (at least in theory).  These girls are supposed to be dreaming about the cock that is going to be spunking on them later that evening.  What do you think the real reason for wedding dresses being white is?  Needless to say this is a sexy concept.

Sorry I have not much to say about this one except that I just wanted to link a decent quality Apink song to balance out all the bullshit failure Apink songs elsewhere in this blog.  Also, I’d fap to this video so it’s a sexy concept.  They’re doing exactly the same ass-shaking moves as Stella anyway, they’re just smiling more and their outfits have a bit more colour.  Sexy and cute are not opposites!

ANYTHING CRAYON POP DO

Way looks hot with black hair.  10/10 would pop her crayons.  Like I give a fuck about the dance and the silly clothes, planning to remove that shit ASAP anyway.

Anyway you get the idea by this point in the blog.  Fangirls think k-pop for guys is like this:

Thanks for your time, and remember the three important lessons that this blog contains: