Well, k-pop’s 2013 certainly sucked a huge amount of dick in terms of music quality, definitely a downgrade on 2012, with most established groups releasing songs of incredible suckiness.  However, there were also some jewels amongst the turds for those who cared to wade through the manure, and here’s my roundup of the jewels for 2013. 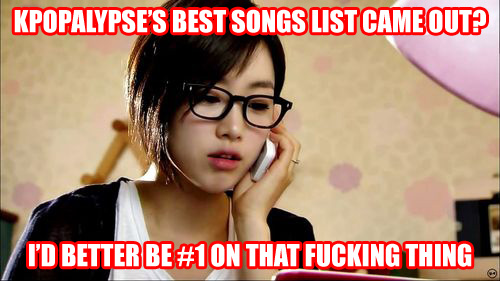 Warning: list has 30 embedded videos and could be lag-heavy on slow computers.

END_OF_DOCUMENT_TOKEN_TO_BE_REPLACED

Here’s the one you’ve been waiting for – KPOPALYPSE’s worst k-pop songs of 2013 list!

Some things to keep in mind:

2.  Christmas songs are exempt, they have their own special blog post devoted just to them.

3.  Feature tracks only, anything else is exempt otherwise shithouse filler ballads on every single k-pop album ever would have scooped almost all the list spots and this post would be very boring.

4.  Songs for OSTs also exempt for the same reason – they’re all awful mushy ballads without exception.

5.  These are my opinions, nothing more.  Just because I’m a qualified music industry person with a complete understanding of music theory and production doesn’t mean that my opinions are any better than yours or anyone else’s.  Music is like ice-cream flavours, there’s no explaining why some people like molasses-and-onion flavoured ice-cream, some folks are just into that, and good on ’em.  Weirdos. 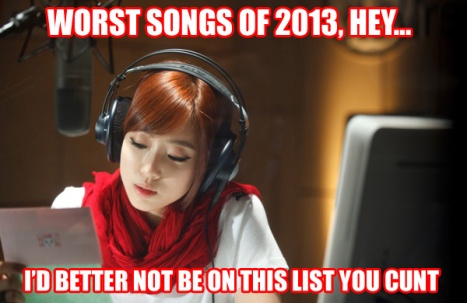 Warning: list has 30 embedded videos and could be lag-heavy on slow computers.

END_OF_DOCUMENT_TOKEN_TO_BE_REPLACED

The k-pop industry releases lots of Christmas songs every year, ensuring that song quality in the world of k-pop goes straight to hell every December.  Braving the shitstorm of rapid-fire crimes against music perpetrated by nearly every Korean label large and small, it’s time for your resident k-pop grinch to round up all the Christmas songs for 2013.  I’ll be listing all the efforts in chronological order that the music videos were released, giving each one a score and showing you the incredibly scientific methods used to calculate each score that I gave.

Warning: list has many embedded videos and could be lag-heavy on slow computers.

END_OF_DOCUMENT_TOKEN_TO_BE_REPLACED

The other day, my website flashed up a little reminder that told me it’s been exactly one year since I started blogging!  Wow!  So I thought I’d collect some fun stuff for your entertainment, to say thank you for bothering to visit.

As it happens, blogging sites do quite a bit of data-mining.  WordPress where I host my own site as it happens really data-mines out the ass, so I’m going to let you into my brightly-coloured data-mining cave which doesn’t look anything like a vagina and show you some of what’s inside.

END_OF_DOCUMENT_TOKEN_TO_BE_REPLACED

For those of you who find yourself agreeing with this anonymous commenter above, you’ll probably not be surprised to know that this is not a recent development and I’ve actually always been an annoying cuntfaced asshole that people hate.  One of the things that used to annoy others a lot about me when I was younger is that I actually knew how to use English properly from a really young age.  However, I might be a cunt, but I’m not a fuckin’ cunt, so it’s time to help k-pop fandoms everywhere and give something back, by highlighting some of the ways in which people who write and discuss k-pop use words incorrectly.

END_OF_DOCUMENT_TOKEN_TO_BE_REPLACED

After reading several astoundingly informative articles on Anti Kpop-Fangirl lately, I thought I’d better step up my game and not lose pace in the blogging information war.  So here it is – the k-pop boobs post you’ve all been waiting for/dreading.  I will perhaps never again deliver a post containing this much raw knowledge.  You are now about to benefit from my exhaustive research into the topic of female boob-appreciation, so I hope you appreciate it.

END_OF_DOCUMENT_TOKEN_TO_BE_REPLACED

By popular demand, a sequel to “Sasaeng Control – Project Luhan”!