K-pop and plastic surgery.  Well-worn territory, right?  It’s like bees and honey – whenever you see one, you know the other is close by.  I don’t really care though.  How is getting injections or plastic in your lips/nose/cheeks/ass/boobs really any different to getting those hoop things in your ears that fuck up your earlobes for the rest of your life, or a tattoo that says “fuck” on your forehead, or a piercing through your cock that also extends through your ballsack, or any number of other things people do to make themselves more aesthetically appealing to themselves or whoever?  I wouldn’t do that shit personally but some people obviously would for whatever reason and good luck to them.  Obviously 90% of k-pop stars are plastic-surgeried to fuck and back and it gets pretty obvious when the studio makeup isn’t on them but so what.  Michael Jackson looked ridiculous in the 90s too but he at least probably thought he looked okay and I sure didn’t cry myself to sleep at night over it (maybe a few Neverland sleepover guests did though).  My point being – less people claiming to be against superficiality while simultaneously getting very upset about other people’s superficial appearances, and the world would be a better place, right?

So it’s less in the spirit of voyeurism or criticism and more in the spirit of community education that I now present to you the following story, which may be old news to some but I think it’s a cautionary tale that should be heeded.  While there is quite a bit of writing out there about this specific incident, which is fairly old, there isn’t much within western k-pop blogging sites so I felt that it was a tale that needs to be told to a k-pop specific audience.

Charming young lass, right?  Well, okay, maybe she looks just a little like JYP there.  (Thought for today: if you ever find yourself with an awkward boner at some inappropriate time, like at the office, or at your sister’s wedding, just whisper “JYP” to yourself, over and over, while imagining what JYP’s face looks like when he whispers that into the microphone in the studio over the opening seconds of the next 2PM single.  Thank me later.)  Here’s a more flattering photo:

Okay, OKAY, that’s even worse.  It doesn’t help that the photo seems to have been taken at “JYP whisper range”.  Let me try again.

That’s more like it.  Some washed-out photography and blurriness plus a bit of stage makeup does wonders.  I think she’s rocking a bit of an Isabella Rossellini in “Blue Velvet” kind of vibe here, and that’s a serious plus point in case you don’t know.  Here is a picture of Isabella Rossellini from a scene in the aforementioned film, included partly for comparative purposes, and partly because all the images below this one in this post are so fucking terrifying that I feel a moral duty to balance them out with something more attractive.  Trust me, Isabella holding a kitchen knife up to Kyle MacLachlan’s throat looks positively benevolent compared to what you’re about to see further down the page.  Consider yourself warned. 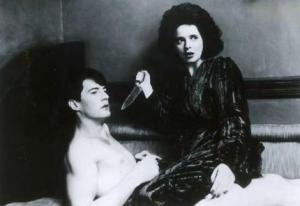 Anyway, even if she’s not your type, you’d have to admit that there are probably people out there more desperately in need of surgical beautification than Hang Mioku.

So the story goes, Hang Mioku was rather fond of having her skin feel smooth and soft, so she went to Japan on a regular basis to get injections of silicone into her face (as you do – there probably wasn’t the proliferation of local plastic surgeons in Korea back then that there is now).  This started at the age of about 28 (she’s now 50-ish so we’re talking pre-idol explosion “trot” era here) and went on for quite a while until the Japanese surgeons said “hey your face has ballooned quite a bit, you’re starting to look a bit wrong, maybe I should stop taking your money now”.  I wasn’t able to source exact dates for these photos but at this point I’m guessing her face probably looked something like it does in this picture of her:

I couldn’t find a non-cropped version of this photo but it looks like she’s resting her head on a guy’s shoulder.  Awww, how sweet.  Hey netizens, if you want a fun project to try in your spare time between perfecting your additional pylon construction tree and leaving crybaby comments on articles about people more attractive and successful than you, try to find a photo of a male k-pop star wearing a blue jacket which matches the same patterns as the one in the above photo of the cropped mystery shoulder guy.  If you find one, then he must have dated Hang Mioku once, right?  (I call this “IU’s couch logic”.)  Anyway you have to wonder how surgeons even let it get to this point in the first place.

Once Hang was eventually refused plastic surgery, she managed to obtain a bottle of silicone on the black market (yes a black market really exists for this stuff, IKR) and did some DIY injections.  Because if you want a job done right, do it yourself, yeah?  Black market silicone is apparently pretty expensive though so after injecting an entire bottle of the stuff (don’t ask how big the bottles are) into her face, she swapped to cooking oil.

The results speak for themselves:

At this point, Hang Mioku realised she had made a terrible mistake, and after appealing to the media kind-hearted Koreans donated thousands of dollars worth of money to help her fix her disfigurement.  As they say, it’s not your appearance, but what’s inside you that counts, and no-one knew that better than the surgeons who extracted 60 grams of silicone and cooking oil from inside Hang Mioku’s face and another 200 grams from inside her neck over the course of at least ten operations.  Of course, while her physical appearance has improved drastically, it will never be what it was before, and a bit of makeup still doesn’t hurt. 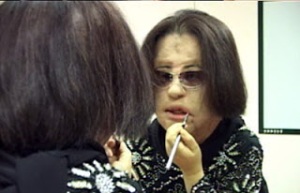 What can we learn from this story:

*  As bad and unnecessary as it is, your favourite k-pop star’s latest shitty round of surgery could have been worse.

*  In the pre-idol “trot” days of k-pop people obviously still had major issues about their appearance. societal pressure etc blah blah. Or they probably wouldn’t do this shit (you’d hope).

*  Don’t lose your objectivity in the face of praise because plastic surgeons will continue taking money from you and telling you that you look great until your surgery has well and truly hit the fug zone.

*  I couldn’t find any of Hang Mioku’s music anywhere while researching this, which just goes to show that even if plastic surgery makes you famous it still won’t help your music career.

*  Jabba The Hut is an attainable plastic surgery goal if you’re into DIY.  For anything else, seek a qualified professional.

This has been a Kpopalypse Community Service Announcement.  Stay safe, kids.